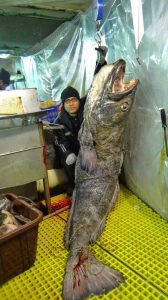 In Viña de Mar, the workshop “Standardization of sampling methods for Chilean bass fishery” was carried out, whose objective was to adjust the methodologies utilized to the current reality of the fishing activity.

The Chilean bass fishery is mainly developed in the southern zone of Chile, in front of the XI and XII Regions. It is caught at approximately 1000 mt depth. It is a fish highly considered, for its exquisite taste, very white meat, with much infiltration of fat and a firm and oily texture. According to preliminary data from the Central Bank, during 2016, exports of Chilean bass generated incomes for the country of 38 million dollars (FOB), more than the 24 million dollars of the year 2015. The main export market was the USA, with 88% of the total. Other destinations were United Arab Emirates, Hong Kong and Singapore.

Claudio Bernal, head of the Discard project referred to the workshop “Today to the traditional fishing research, two challenges are added, estimate how much is discarded in this fleet and also, quantify the level of fishing that is preyed on by killer whales and sperm whales.

Jimmy Vera, an IFOP scientific observer, explained that “at the Chilean bass workshop, we are carrying out a coordinating and standard sampling protocol for Chilean bass on board these vessels, including data that will allow us in the future to estimate the amount of Chilean bass that orcas and Sperm whales consume from the catch made by fishing boats. These marine mammals take advantage by feeding of the fish that is caught in fishermen’s hooks.
We collect biological data, which will help determine the amount of Chilean bass at the national level and then provide background for the scientific committee to determine the amount that can be taken from the sea, the quota. The trips of these boats are long, so we must remain on board for 40 to 60 days. ”

Fredy Sepúlveda, scientific observer added “the workshop serves us to unify criteria and methodologies of data collection among all the observers who board a ship, since once on board, it is not possible to consult the doubts we have.”