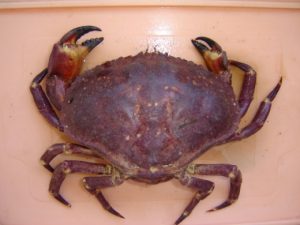 These are: “Methodological guidelines for the assessment and estimation of the abundance of the crab species (generic species), management area regime”. And “Update of biological-fishery parameters of crabs in south-central Chile”.
In Chile, benthic crustaceans are represented by about 250 species. From these total, not more than a fortnight attract the artisanal fishing sector because of its commercial importance, most of which belong to the group known as “crabs”. From the social point of view, the crabs are the annual or seasonal sustenance of the artisan sector that access them for their coastal habitat. Extractive activity is carried out throughout the country and according to the official statistics of the Servicio Nacional de Pesca y Acuicultura (SERNAPESCA), during the last years, the total landing of all species of crabs ranged between 4,000 and 5,000 tons annually, where the main species extracted were: stone crab, hairy crab, lemon crab, mora crab and white crab .

Bearing in mind that the generation of information on the species that make up this resource allows the authorities responsible for the administration of resources, to provide useful information to generate adequate management patterns and to the entrepreneurs and fishermen, elements of valuable guidance for the development of his activities. During March, the Instituto de Fomento Pesquero (IFOP) developed two workshops related to this resource.

The first one was held on 16 March at the “Marcos Espejo” Auditorium of IFOP in Valparaíso, entitled “Methodological guidelines for the evaluation and estimation of abundance of the crab species (generic species), management areas regime”. This activity is part of the project “Program for Fisheries Monitoring under the Regime of Management Areas 2016” developed by IFOP, with the purpose of advising the Subsecretaría de Pesca y Acuicultura in the field of Management and Exploitation of Benthic Resources, AMERB.

The context relates to a process of establishing standard methodologies of direct evaluation proper for benthic species that are objectives of exploitation for organizations of artisanal fishermen. The direct assessments generate the necessary data so that the technical bodies responsible for the studies in AMERB can estimate the number abundances and biomass by weight of the main species, with which is possible to estimate sustainable catch quotas. However, the data being collected presents problems when making temporal and spatial comparisons, since the different technical organizations utilize different methodologies of direct evaluations. The latter has effects when assessing sustainability and conservation objectives in the fishing of benthic resources in the management areas; therefore, it is necessary to establish methodological standards, which are required in the conduct of direct evaluations, an issue to be dealt by the Subsecretaría de Pesca y Acuicultura (SSPA).

Luis Ariz, Head of the Management Areas Section, explained that “the workshop had the participation of the SSPA, IFOP and national experts, who discussed about methodological aspects, identifying guidelines that aim to improve the sampling of direct evaluations of crabs in AMERB. This happens in order to improve the quality of information that is being generated in the studies of these areas “.

The second activity called “Results Dissemination Workshop” was held on 21 March, also at IFOP premises, whose purpose was to present the results obtained in the study “Update of biological-fishery parameters of crabs in the central south- zone of Chile “. This project was carried out by IFOP jointly with Instituto de Ciencias Marinas y Limnológicas de la Universidad Austral de Chile (FIPA) and was financed by the Fondo de Investigación Pesquera y Acuicultura (FIPA). It was attended by professionals from the Instituto de Fomento Pesquero, Subsecretaría de Pesca, national experts and users of the crab fishery.

Andrés Olguín indicated that this work “allowed to generate information on five species of crabs (stone, hairy, lemon, mora and white), basically on the size and time of first sexual maturity, first copula and egg carrier, type of mating strategy, parameters and growth functions (in length and weight) and life history parameters (mortality and critical size). This will undoubtedly be a valuable contribution to quantify the performance of management measures currently imposed,” concluded the researcher of the IFOP.