Between March 6 and 12 in Victoria, Canada, the international symposium “Dynamics of Small Pelagic Fish Resources” was held. From Chile, there were professionals from the Instituto de Fomento Pesquero (IFOP), the University of Concepción, the Catholic University of Valparaiso and from INPESCA.

The objective of the symposium was to revitalize international cooperation on the research of small pelagic populations (PPPs), to identify, discuss, publish and develop a reference framework for addressing unresolved issues such as the impact of climate change and/ or pressure on the resilience of PPPs using a comparative approach.

IFOP researcher Antonio Aranis explained that “small pelagics provide about 25% of the total annual fishery catch and are well known in many coastal communities worldwide, particularly in developing countries where they are critically dependent on these resources.” Population size (PPP) is subject to severe fluctuations in abundance and geographic distribution due to environmental impact and anthropogenic influence. Despite many coordinated research efforts, there is still insufficient knowledge about the determining factors and pieces of information on PPP recruitment and particularly the interactive effects of environmental and anthropogenic factors.

In addition, it was analyzed the phenomenon of population fluctuations (PPP) that vary synchronously in many regions disconnected from the global ocean. This problem is still intended to be understood considering the large distances between PPP stock and the unresolved mechanisms of atmospheric and oceanic connections that are weak or unknown.

Summaries of works presented by IFOP

Modeling the habitat of anchovy (Engraulis ringens) between 1997 and 2016 on the coasts of the Southeast Pacific.

The work considers to implement a model of species distribution based on the information of the research cruises, integrating the acoustic information of anchovy in the whole coastal strip of Chile between the period 2007-2016 during the austral summer, when the recruitment of anchovy is massive. To that end, the possible resource-environment associations aim to identify spatio-temporal changes in the distribution patterns in the historical series analyzed, taking into account the influence of environmental factors that predominate during the development of the cruises and the spatial scale where these are developed. 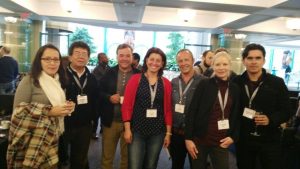 Environmental conditions for anchovy and the recruitment of common sardines in central-southern Chile (33 ° – 40 ° S) between 1987 and 2013. 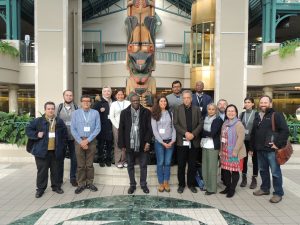 It was analyzed the available information and the information from the Instituto de Fomento Pesquero’ own studies on the environmental, biological and fishing environment associated with the center-south, and conceptual models were elaborated which incorporates defined processes on the environmental, biological, and fishing planes, with seasonal scales (inter-seasonal, seasonal, inter-annual and inter-decade), and four spatial scales (center-south fishery area), the eastern edge of the South Pacific Ocean, the Pacific Ocean (watersheld level) and global, which considers the stages of life cycle (Egg, larva, juvenile, adult), distribution areas (spawning, nursery and feeding areas), the association of population dynamics, environment and community with the fishing.

The common sardine (Strangomera bentincki) is one of the most important fishery resources in the south-central zone of Chile (32 ° -47 ° S), therefore, its fluctuations have great social and economic impact.

This study analyzed the environmental influence on common sardines juveniles during the 2000-2015 period in which the variability of the percentage of juveniles (<9.0 cm) and its relation to the MEI index were analyzed. The length information was analyzed as a time series and modeled from a SARIMA model (box and Jenkins, 1976).

To evaluate the independence in the series, the statistical test of Ljung-Box was applied and the seasonal patterns were evaluated with the robust g-test statistic (Ahdesmakietal., 2005). Changes in trends for both length and environmental data were analyzed using the BreaksforAdditiveSeason and Trend (BFAST) method. Finally, the relationship between these two indices was evaluated by cross-correlation analysis (CCF).

In the present work we analyze the anchovy catches of adults and juveniles (Engraulis ringens, Jenkins 1842) from 1997-2016, to determine changes in distribution, concentration and reproductive behavior during different stages of El Niño events (beginning, during and post ), using spatial indexes: center of gravity (CG), inertia, coverage (CI), Gini, spatial concentration (IAE) and Gonadosomatic Index (IGS). The results indicate that at the beginning of the El Niño event, the anchovy catches increase and concentrate in the coast, the Gini and IAE increase, and the CI decrease. While during the event these indexes decrease, registering a displacement of the CG towards the south and minor catches, mainly due to the less availability of the resource provoked by the deepening of the anchovy jointly with the thermocline and oxicline.

An evaluation of the growth-survival and “bigger-is-better” hypotheses was presented using the microstructure analysis of otoliths in juvenile fish (pre-recruits and recruits) of anchovy in northern Chile. Our results show that the relationship between growth and survival of the September 2014 cohort is positive, ie the survivors of that cohort were the fish that presented a higher growth rate of the original population, confirming the hypotheses.