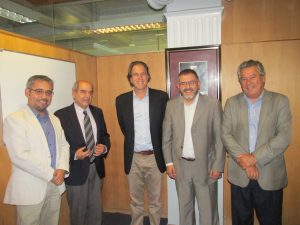 On Thursday, March 23, Alessandro Lovatelli, FAO’s new Fisheries and Aquaculture officer for South America, made a formal visit to the Instituto de Fomento Pesquero jointly with the FAO expert, Roberto de Andrade. On the activity, there were present: Gabriel Yany President of the IFOP Board of Directors, Leonardo Núñez Montaner IFOP Executive Director and Mauricio Gálvez Head of the Fishing Research Division of IFOP.
At the meeting Mr. Lovatelli reported on his extensive professional experience and the work he has done in aquaculture; among other things, emphasized that he joined FAO in 1987, and that since 2001 he promoted the aquaculture area at FAO in Rome. It has promoted initiatives in the area of aquaculture in several countries with particular emphasis on Southeast Asia.
The Executive Director of IFOP commented on the Institute’s main lines of work: Hydroacoustic assessments and the state of fisheries and biologically acceptable catch projections for the country’s main fisheries resources. In the field of aquaculture, discussions were held on IFOP investigations on red tide.
In turn, the Executive Director commented that “we talked with the FAO officer about what we have called the Swarm Project, which is the linkage of our researchers with the national and international environment, part of that project has to do with CISESE Mexico, the CSIRO of Australia and the IOE of Spain. But another part is the creation of a network of research institutes within the trade framework and integration agreement of the Pacific Alliance, made up by Chile, Colombia, Mexico and Peru. We will soon have a meeting between the research institutes in fisheries and aquaculture of these countries and we ask FAO, collaboration so that they structure us, advise us and help us in general to build this network.”