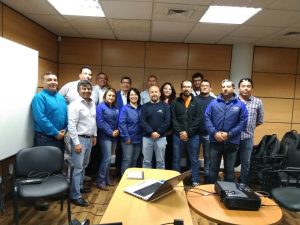 On March 14 – in Talcahuano – “Discard and Incidental Catch Research Program” project results were reviewed with fleets representatives which operate on common hake and hake. Representatives of PacificBlu and Landes fisheries, together with IFOP scientific observers and researchers, participated in this meeting.

Discard corresponds to a fraction of fishing, which for various reasons is returned to the sea, which prevents it from being processed. Examples of causes of discarding worldwide in any fishery can be mentioned some of the species captured together with target species, have no market or in capture processes specimens are damaged. In general, countries favor discards reduction, so that all captured marine resources can be used.

“Between 2013 and 2016, industrial fleets focused on common hake capture managed to reduce total discarding from 20% to 11%, through various actions, including modification of its networks characteristics, that allowed to avoid cuttlefish capture as accompanying fauna, main discarded species; other actions were adjustments in their operation and aiming to achieve a greater use of fishing, says Catalina Román, project researcher “.

According to Claudio Bernal, project manager “since that last year (2016), these fisheries maintain a discard reduction plan, whose results are monitored by IFOP, so that the authority can evaluate their effectiveness.”