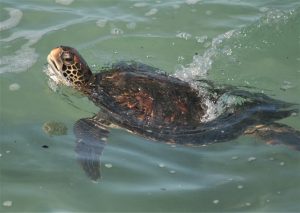 Representatives of all sectors will collaborate in the development of what will be the first meeting to be held in the city of Arica.

The Regional Bureau of Sea Turtles of Arica, which coordinates protection actions  of the colony existing in the sector of Chinchorro Playa Puntilla, during their first meeting of the year presented a pilot evaluation project for the use of circle hooks in the long line fishing fleet to mitigate the impact of the incidental capture of sea turtles as well as the preparations for its first International Congress in the city.

Marco Soto, regional director of fisheries and aquaculture of the XV, I and II regions  (Subpesca), said that sea turtles are endangered species, with serious problems of conservation and are included in Appendix I of CITES and, therefore, require mitigation measures that help to reduce their catch and mortality.

“In this regard we are working on the implementation of a Marine Reservation for this species, which would be the only one in Chile and Latin America in this area, strengthening monitoring and marking of specimens to learn more about these species, along with a series of actions and initiatives carried out by diverse institutions that make up this regional table”. Also the zonal authority added that “We are working together with Arturo Prat University and other institutions in the coordination to make an International Congress of sea turtles in Arica, the second half of the year, where we will invite national and international experts in turtles, transforming Arica in Chile’s Turtles region”.

Dr. Patricia Zárate, Head of the Project of Highly Migratory Resources – Ecosystemic Approach of Instituto de Fomento Pesquero (IFOP), who presented the experimental project of change of hooks, said “The turtles that inhabit Arica’s off waters and the area that you want to allocate as marine reserve, are being caught incidentally in bottom long line fishing. One of the mitigation measures that have been effective in other countries to reduce the impact of fishing, is the use of circular hooks. Therefore, together with Subpesca and other international organizations, such as the Institute of fisheries of United States (NOAA-NMFS), The Lost Years/The Ocean Foundation and with the support of the Inter-American Convention for the protection and conservation of sea turtles (IAC) we are coordinating this study with of fishermen of Arica Union. This study aims to 2 or 3 vessels experimental trips to test whether this type of hook reduces the hitch of the turtles without disturbing the catch rates of the halibut resource, thus all win”.

In the sector of La Puntilla in Playa Chinchorro, there is a feeding area of females and juvenile turtles. Sector that is inserted in the urban area of the city, which gives you a unique space for the species in the country, and on the other hand, represents a set of threats, mainly related to urban development, increasing use of the coastline, polluting agents, among others.

Green Turtle colony in La Puntilla Beach sector of Chinchorro, has an approximate number of 400 specimens, according to estimates from  Universidad Arturo Prat, who is conducting the research and monitoring of this species through a project funded by the Regional Government of Arica and Parinacota. This is the only stable colony in Chile and of these dimensions.

The Regional Bureau of sea turtles is presided over by the Zonal Director of Fishing and Aquaculture of the XV, I and II regions, Marco Soto, formed alongside the SUBPESCA, various public services such as the Seremi of Environment,  Sernapesca, Sernatur, Maritime Governance, Arica Port Governance, Arica City Council, DOP, together with the Universidad Arturo Prat,  artisanal fishermen , NGOs, among others.