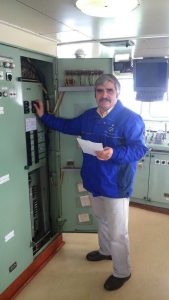 Hector Alvarez, Electronic Officer of R/V Abate Molina of Instituto de Fomento Pesquero, will get onboard from 3 to 19 October 2016 in the research vessel Alucia of the Association for the Conservation and Oceanic Research (ORCA) of United States.

Since 2011, the Instituto de Fomento Pesquero, through the Department of Marine Operations, is part of a program carried out by the Hydrographic Division of Chilean Navy (SHOA), known as National Scientific Observer, which consists of boarding a Chilean professional on board foreign vessels which are requesting authorization to conduct scientific research in Chilean territorial waters. The National Observer, designated by the State of Chile, must comply with certain works to safeguard national interests.

Hector Alvarez of the Instituto de Fomento Pesquero, will embark from 3 to October 19, 2016, aboard the research vessel Alucia of the Association for the Conservation and Oceanic Research (ORCA) of United States.

The aim of the research will be to increase current knowledge on the biology and ecology of the cuttlefish or giant squid (Dosidicus gigas), through the study of their behavior, techniques of predation, defense and reproduction (spawning) of the resource in their habitat.

During the cruise, underwater footage will be made through underwater cameras, and in the case of predatory behavior, optical decoys will be used to lure cuttlefish. Also, in case the above techniques cannot be utilized due to bad weather, such measurements are to be made through a fishing anchorage where one Go-Pro camera will be attached.

According to Ivan Toro, during the year 2011, a boarding was carried out in the German research vessel “Polarstern” to Antarctica; later on 2014, Andrés Ruiz embarked on the R7V “Nathaniel Palmer” of United States and this year will be Hector Alvarez turn in the R/V “Alucia” also from the US, being a great training opportunity and also to get much experience in everything related scientific equipment and biological, oceanographic, acoustic and technical information.

Finally, Ivan Toro says that the ship “Alucia” is 51.7 meters long, with a deck for helicopter and its main operating characteristics are referred to research by diving and underwater operations with two mini submarines (Triton 3300 and deep Rover 2) that allow recording of high-resolution video up to 1,000 meters deep.