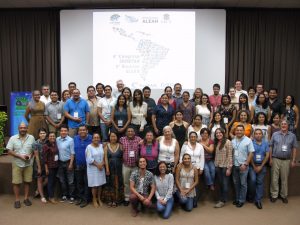 In Cancun, Mexico between October 23rd and 27th, Mexican Society for Noxious Algal Blooms Study 4th Congress and the 2nd. Meeting of Latin American Association for the study of Noxious Algae accounted with the presence of IFOP Researchers (Fisheries Development Institute) Hernán Padilla with the work ” Extractive windows Identification in benthic resources located in harmful algal blooms areas (FAN). And Jorge Mardones with his work “Advances in the study of ictiotoxins associated with Noxious Algal Blooms in the south of Chile. (see summaries below)

Hernán commented “in tmy case my work, it was financed by Aysen Regional Government through the Special Extreme Zone Development Plan (PEDZE) he highlighted it as an important contribution to science development. The meeting in Mexico allowed us to share information and experiences associated with the investigation of noxious algal blooms, we exchanged different points of view in how we face common problems, and learn about the advances in Latin America in the matter. It was also useful to create and strengthen professional contacts with researchers from Mexico, Brazil, Ecuador, Uruguay, Argentina and Colombia. For us, creating professional links is always a first step, to make research alliances, which in the near future will allow us to close the gaps in the knowledge of the FANs. 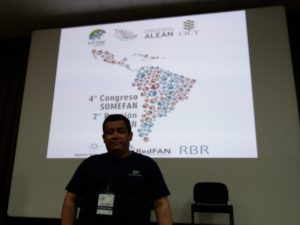 Using Red Tide Program generated toxins time series (2006-2017), spatial and temporal dynamics of the toxins were evaluated in order to identify extractive windows in three benthic resources of commercial importance in Aysén region. In the analysis, the series of paralytic shellfish toxin (TPM) and lipophilic shellfish toxins (TLM) were used in the resources Venus antiqua, Aulacomya atra and Mytilus chilensis, applying multivariate statistics. The results show a geographic pattern that allowed determining localities, between the months of July and January, when toxins levels allow to define extractive windows only for Venus antiqua. There are also significant differences between resources, V. antiqua always had less occurrence of TLM. The highest concentration of TPM in resources is recorded during summer and autumn. When comparing this toxin between resources, Mytilus chilensis is the one that incorporates the lowest concentration of TPM.

The Harmful Algal Blooms (FANs) are natural phenomena that frequently appear in the Chilean coasts. In the fjord zone, the dinoflagellate Alexandrium catenella is the most studied microalgal species not only due to its production of paralyzing mollusc venom (VPM), which strongly affects the mussel farming industry, but also due to its ichthyotoxic power. Experiments using trout gill cell lines (RTgill-W1) to determine the cytotoxic properties of A. catenella, showed that purified fractions of paralyzing toxins (C1 & C2, STX and GTX 1 & 4) have a very low cytotoxic activity against branchial cells compared to the synergistic interaction between reactive oxygen species (EROs) and polyunsaturated fatty acids (PUFAs) that are synthesized by vegetative cells of A. catenella. On the other hand, the novel determination of ion fluxes from branchial cells exposed to toxic microalgal substances through the application of the MIFE technique (non-invasive Microelectrode Ion Flux Estimations) showed that A. catenella metabolites obtained from in vitro cultures In vitro, they stimulate the potassium channels (K +) producing a strong exit of K + ions from the plasma membrane of the branchial cells, but again this effect was not the responsibility of the paralyzing toxins. The release of K + ions from stressed cells is known to produce shrinkage and cell death, which can be a key factor in explaining branchial damage in captive salmon during blooms of the toxic dinoflagellate A. Catenella in southern Chile.