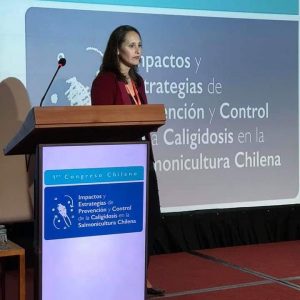 About researchers and their presentations

Dr. Margarita González presented the work “EFFECTS OF ANESTHETIC APPLICATION FOR BENZOCAINE FISH ON THE CONDITION OF Caligus rogercresseyi”

“This research’s objective was to determinate the effect on the condition of C. rogercresseyi after benzocaine exposure. This is because fish anesthetic is present during parasites from the fish collection, therefore, the study aims to end uncertainty about potential effects on the results and interpretation of susceptibility bioassays, among others. The results indicate that anesthetic use at recommended dosage does not produce harmful effects on the parasite. Only much higher concentrations than recommended can impair the parasite condition. This information is relevant to be considered when executing the bioassays, in order to limit negative effects derived from anesthetics use in the results and / or diagnoses ”

On the other hand, he presented the work in poster format “SUSCEPTIBILITY OF Caligus rogercresseyi FROM NATIVE FISH AND CULTIVATION CENTER AGAINST HYPOSALINE WATER TREATMENT ”

“This study aims to determinate hyposaline water effect on the condition of C. rogercresseyi from the Patagonian bass (Eleginops maclovinus) and cultivation center, because freshwater treatments are an alternative control of Caligus rogercresseyi, inspired by the Natural deworming occurred during fish migrations to estuarine waters. The results suggest that there is a differential susceptibility of C. rogercresseyi associated with the origin of the parasite, probably explained by the degree of exposure to salinity variations of different water bodies . This information can be useful for parasite in estuarine bodies of water management”.

Claudia Spinetto explained CAN THE FISH Hypsoblennius sordidus be a PREDATOR of Caligus rogercresseyi ?: A DOUBT PRESENT FOR YEARS!

This design tries to evaluate Hypsoblennius sordidus “Cachudito” on Caligus Rogercresseyi predatory behavior. Four groups were contemplated: 1 Control (without food). 2nd Food Only C. rogercresseyi, 3rd Food only Pellet and 4th Food Mix of C. rogercresseyi and Pellet. Proving that H. Sordidus ingests the parasite apparently preferring instead of the pellet. It is intended to continue delving into the subject and assess their behavior by cohabiting with salt flats later. 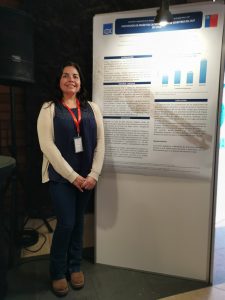 Loreto Ovalle on her Poster: CALIGID PARASITES PROPORTION IN WILD FISH OF SOUTH CHILE she explains “This research aims to deepen the knowledge related to presence and identification of parasites present in wild fish in different marine areas of the regions of Los Ríos, Los Lagos, Aysén and Magallanes between December 2015 and August 2019. Among the main results, it is described that the proportion of C. rogercresseyi remained around 29% of the total parasites during the execution of the study, increasing to 45.9 % during the years 2018-2019, being higher than other identified caligid species. The identification and quantification of the proportions of caligid parasites present in marine species of marine environments in southern Chile is of great relevance due to the potential transfer of Caligus rogercresseyi infestation stages from wild fish to farmed salmon fish and vice versa, having as a potential consequence an increase in the parasite loads of these individuals