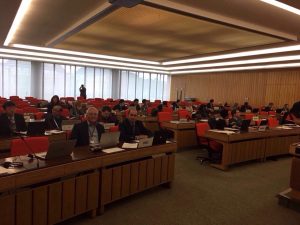 Between March 26 and 31, at OMI headquarters in London, Dr. Leonardo Guzmán Chief of IFOP Aquaculture Research Division and Head of the Red Tide Project (Proyecto Marea Roja), participated in the annual meeting “Protocol of London and London Convention scientific group”, as part of the work for the International Maritime Organization (OMI), one of the many branches of United Nations. He was invited by the Commandant. Enrique Vargas official of the Navy at DIRECTEMAR and representative of Chile to OMI.

The meeting dealt with scientific subjects linked to different contents of importance for the marine ecosystem, particularly to achieve a sustainable development from scientific background, incorporating such diverse aspects as what to do with waste from hull of fiberglass boats, the impact caused by the dredging and dumping of sediments in other areas of the coastal as also about the criteria that are being applied in countries such as United Kingdom, Ireland, Australia, USA, among others.

Dr. Leonardo Guzmán explained “the exhibition reflects the commitment to Chile. Its complement the official reports submitted respect to the events during the bloom of Pseudo-chattonella associated with a mass mortality of salmon during the summer of 2016. Given that Chile is a Member State and subscriber of the London Protocol, it is considered important its presence showing the particularities of the flowering of a. catenella occurred in the fall of 2016 in the northern part of the fjord, delivering a hypothesis of the Oceanographic climate mechanisms that would explain bloom and its particular distribution in the geography of Los Lagos and Los Ríos regions. “And is a way to objectively transparent facts linked to harmful blooms, which provoked a strong economic and social impact”

He added the presentation “has relationship with unusual bloom of Alexandrium catenella on the Lakes region, and that then it spread to the Pacific Ocean to the North, reaching the presence of this harmful microalgae up to Mehuín locality in the Los Rios Region.” It was structured in four parts, the apparent expansion of a. catenella from the South to the North, becoming present in all the fjords in a little more than 30 years, the existence of a history suggesting that this microalgae would have been present in the fjords from end of the 19th century and the early years of the 20th century; the particular characteristics of the spatial and temporal distribution of a. catenella in fjords and finally a hypothesis that could explain the unusual flowering of the fall of 2016, linked to the final phase of “EL NIÑO 2015-16 “.