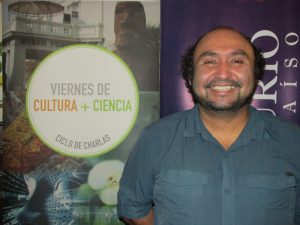 Friday 31 March at 18:00 in Museo Fonck (4 Norte 784, Viña del Mar). The talk was “algae and its ecological role in coastal environments of Chile”. Luis Figueroa Fábrega, researcher at the Instituto de Fomento Pesquero (IFOP), invited us to learn about the diversity of species that inhabit the Chilean coasts for awareness of its importance and care.

Culture Friday + science is an effort of the project partnership Regional scans of CONICYT Valparaiso and the Fonck Museum. Its purpose is to invite the community to know the impact of science and it involved the scientific community in a direct dialogue. The space has the participation of academics and researchers of the University of Valparaíso (UV), the Universidad de Playa Ancha (UPLA), the Universidad Técnica Federico Santa María (USM), the Pontifical University Catholic of Valparaíso (PUCV) of the Institute of Fishing Promotion (IFOP).

Gianino Livellara Professor of biology and Natural Sciences and in charge of the valuation area for the Explora Associative Project in Valparaiso Region said “the objective of the activity is to develop a consistent and concrete bridge between the scientific community and society, men, women in science manage to share with young, male and female audience interested on science attending this cycle of talks”.

IFOP support during this month allowed us to finish an entire month dedicated to less recognized living beings species. With a talk about algae that accounted more than 70 people assisting. “Having a full room at the Museum second floor”.

About his talk Luis explained “the forests and meadows of algae are considered highly productive ecosystems which play important ecological roles in coastal marine ecosystems. But in the last time, due to a considerable extraction pressure, the sustainability of these communities has been put in a check position. Much of this situation, relies in two problems: the first is the lack of knowledge that exists for the general population about these species, and second as many of these grassland and marine forests are under the sea, they are not visible to ordinary people, and therefore there is no effect generated by the extraction of these resources in the marine environment. “By what the presentation focused on knowing the algae, passing by their definition, their representative groups, its evolutionary history, as well as its ecological role: seen not only from the concept of primary production, but also by the structuring role in coastal marine ecosystems and the threats you face these species across the country”.

Luis Figueroa-Fábrega, is a Marine Ecologist, IFOP scientific researcher and Professor of the Engineering Faculty of the University of Viña del Mar. Its main lines of research have focused on the study of benthic ecosystems, both of the intertidal area as of the subtidal, relations between marine biological communities and their environment, the evaluation of the degree of connectivity that exists between various benthic populations spatial and temporal and the development of monitoring programmes, monitoring, identification of indicators and indices of environmental quality to support the development of management in coastal areas. He has worked in more than 40 research projects which include “mortality study of swans of black-necked in the wetland of the river crossings, Valdivia”, “Different programs of environmental monitoring in aquaculture in the country” and the study of “determination of hydrobiological resources and impacts on marine ecosystems in the area of influence of the Bay Quintero hydrocarbon spill “, V Region”. During recent years, it has actively participated in various studies aimed at evaluating the effects of anthropogenic activities that develop in the coastal edge, on benthic resources and their ecosystems across the country.