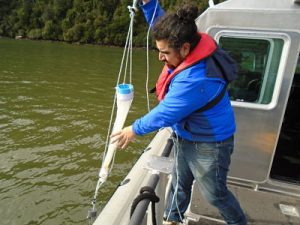 The sample is the microalga Heterocapsa Triquetra a dinoflagellate which is not harmful to man or to other marine organism
On March 30, Sernapesca, took a water sample in the vicinity of Chacabuco Bay, within the fjord of Aysen to be analysed by professionals of the IFOP to confirm the possible presence of harmful microalgae, since the sea in that area had a red color which drew the attention of the Navy and Sernapesca professionals.

Luis Iriarte researcher of FIFG explained “on Thursday, March 30, in the afternoon is informed of the presence of a red spot in the Bay of Chacabuco, within the Aysen fjord, so that Navy contacted Hernán Padilla (head of FIFG Aysén) about this situation. Consequently were attended the site, to confirm the existence of this spot, the sample collection for analysis in the laboratory, and in substance to identify the causative organism of water color change”.

The next day on Board of a navy boat in conjunction with officials of Sernapesca, they toured the bay, without finding the reddish discoloration, but it was possible to take new samples in the bay area. 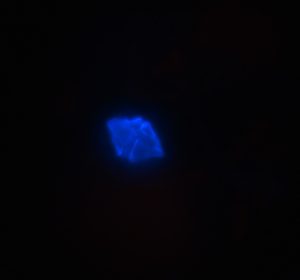 On the analysis of samples in the laboratory, Iriarte adds, “both of the samples collected with the Navy, as of those collected by Sernapesca, allowed to see a high abundance of a dinoflagellate called Heterocapsa  Triquetra, a microalgae which is not harmful, therefore does not affect the man or to other organisms of the marine ecosystem.”

” The discolorations in water are not always harmful, natural events, and therefore it is important to have access to samples that allow us to evaluate the type of micro-organism responsible for the change of color of water”