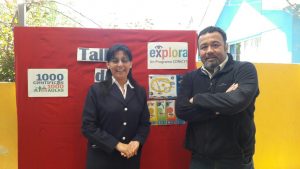 In the Science Week organized by Explora, researchers of IFOP will give speeches in Valparaíso, Algarrobo, Calle Larga, Quilpué, Vina del Mar, Puerto Montt, Ancud, Dalcahue and Achao, besides of guided tours to IFOP laboratories in Hueihue and Putemun in Los Lagos region.

A team of professionals from Instituto de Fomento Pesquero will participate this year in Mil Científicos Mil Aulas program, instance that allows to bring closer the world of science to classrooms, students from across the country receive in their schools, schools and high schools, researchers who give a speech, showing the characteristics of their work and their motivations to became scientists.

IFOP researchers and their speeches

Patricio Mejias and his speech: “Marine environment.” In this speech, he will present the main features of the world’s oceans and its most important aspects in terms of organisms and associated species. Also, a description of the most urgent environmental problems affecting the marine environment such as overfishing, pollution and climate change.

Luis Ossa talk: “The path of trash: from us to the ocean” and Milena Pizarro talk: “Garbage in ocean: will deal with pollution caused by garbage thrown in prohibited places. Potential sources of waste generation will be shown, also the different impacts that can provoke to the environment and marine organisms, the final destination and possible solutions.

Jorge Azócar: “The route of sea turtles” and Patricia Zárate: “Let’s help to protect sea turtles” Sea turtles teach us that “everything is connected.” They are part of two vital ecosystems, beaches and marine systems. If turtles become extinct, these two systems will be weakened. Because humans use the ocean as an important source of food and use the beaches for many activities, the weakening of these ecosystems could have harmful effects for humans.

Carola Hernandez: “How do we know the birthday of fish,” the researcher explains to children how the age of the fish is calculated by means of otoliths.

Catherine Grendi: “Climate change,” explains to children in a simple way the differences in concepts related to climate change, such as the greenhouse effect as part of a natural process, greenhouse gases and global warming of anthropic origin. The important thing is to make them aware and to take an active role in the community, transmitting the message and performing simple, everyday and very valuable actions to reduce our carbon footprint.

Loreto Ovalle: “Fish also get sick” explains that fish suffer from diseases, the techniques used to detect them in the laboratory and, finally, the importance of detecting these diseases in aquatic systems and communities of people who live from fishing and aquaculture activities.

Victoria Escobar: “Corals in Chile“, in this talk is disclosed to the school community the presence and importance of the existing cold water corals in Chilean waters and adjacent sea. In addition, the important role of these bodies as a habitat for other species and how they are affected by fishing activity. 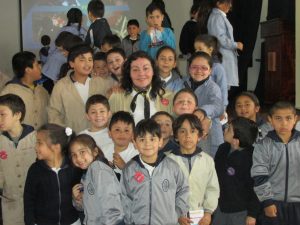 At the Mariculture Center Hueihue, school pupils of San Juan school from Ancud and Rayen Mapu school of Quellon will be received. A video will be shown to pupils with the institutional work and then a guided tour will be offered to center premises, laboratory and culture of available resources. Then, interactively students can see small organisms through microscopy and multimedia equipment.

The Putemún Center will host pupils from Ayelén Dalcahue school, Achao Insular High school, Ramon Freire High school and Pedro Velazquez Bontes School; children will learn about the impacts of aqua culturist activity on the environment. Also, the causes and consequences of harmful algal blooms (red tide) in the environment and society will be explained. The researchers in charge of the activity are: Elias Pinilla, Cristian Ruiz, Heraldo Contreras and Vladimir Murillo. 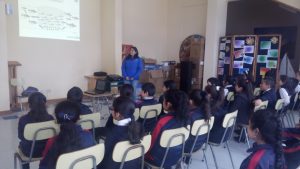