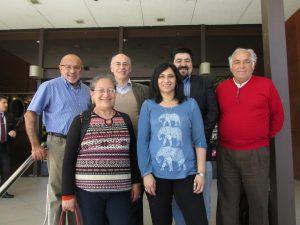 At Vina del Mar, Shark Working Group (GT- Sharks) met. This group is formed by a team of researchers who study these species in Chile, this unit advises Subsecretaría de Pesca y Acuicultura on issues of management and conservation of these species. This group is also responsible for managing the National Action Plan for sharks and participates in regional programs on shark conservation and adaptation to climate change in fisheries and aquaculture 2016. The attendees were the following researchers: Fidelina González, academic of University of Concepcion, Francisco Ponce of Subsecretaría de Pesca y Acuicultura, Miguel Araya of Arturo Prat University, Patricio Barria, Edison Garces and Patricia Zárate of Instituto de Fomento Pesquero.

The president of the Shark Working Group, Master of Science, Mr. Patricio Barria, is a researcher of IFOP, leads this counseling group and is in charge of Fisheries Highly Migratory Resources Monitoring project. He explained that the “main topics discussed were the management and conservation of fisheries coastal sharks, mainly Picked Dogfish (Squalus acanthias), and common dogfish (Mustelus Mentus), species that inhabit the continental shelf of Chile and are distributed from Arica to Cape Horn and are present in the intertidal and subtidal areas on the continental platform, often in shallow waters, which have a high anthropic impact either by commercial and recreational fishing, marine pollution and alteration of their coastal habitat as a result of civil works. Regarding the effects of fishing, these species are caught as bycatch in the main national fisheries (i.e. demersal fish caught with trawl gear) and generally are discarded and do not have full use. In artisanal fisheries, are also captured and used to supply the domestic market and sold in the ports and coves for human consumption. A fraction of these catches go to process plants where products are to be exported under the generic name of shark. For these species, there is little scientific knowledge regarding their life cycle (longevity, sexual maturity, length of gestation, number of offspring, mortality) and their patterns of spatial and temporal distribution, and it is important to make progress in defining their conservation status, very important information for the development of conservation and management measures and sustainability of the activity of national fisheries.

Edison Garces, researcher of IFOP detailed “My presentation is about shark species that are not being considered within the fishery assessment. This are Picked Dogfish (Squalus acanthias), and common dogfish (Mustelus Mentus), they present a very fragile biology, their characteristics of their life cycle makes them more vulnerable than other species. They also present a late reproductive maturity and are long-lived species, especially Picked Dogfish with pregnancy at 24 months, with a sexual maturity at 25 years of life. In Chile, both sharks have no conservation measures, in spite the exploitation it is significant. They are located throughout the Chilean coast, its main fishery occurs in the region of Los Lagos and Aysen, where there is confusion in their levels of landings. The idea of the working group is to gather scientific information to support conservation measures for both species. Besides, both species are exported, being their products catalogued with no specie and they are sold mainly in the Asian market.”

Miguel Araya, professor of the Universidad Arturo Prat de Iquique, added: “there is a lack of knowledge about chondrichthyan species in the northern part of our country, sharks are non-target species, but they are extracted as bycatch with other resources; this is why we must regulate and study these species. Therefore, it is necessary to create proposals for studies on these species, which are highly vulnerable, such as, elephant fish and some rays that are expanding their distribution and we must have a permanent monitoring on Chilean costs on registration and information about them.”