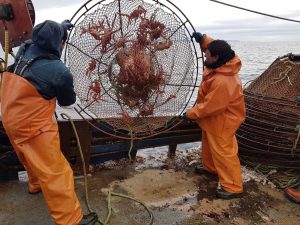 Researchers from both organizations discussed different knowledge areas in which each group is working and looking for joint vision points from which a work agenda will be generated.

This cooperation is based on the framework of an existing agreement that has stands for several years between both institutions. In the last days, Benthic Crustacean Fisheries Program members, together with Trans-Andean institute scientists, discussed different areas of knowledge in which each group is working and looking for common points from which a work agenda can be generated.

On their side IFOP, have made progress in some aspects, such as filming displayed seabed performance, an activity that is also planned to take place in Argentina.

Future meetings and research to be carried out in the future show scientists interaction enrichment, in benefit of a common fishery resource for both countries. News source: INIDEP