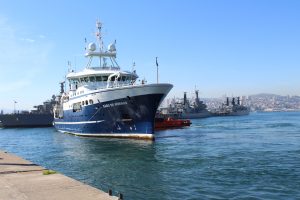 Legua explained that one of the procedures that will be used to evaluate these resources is the hydroacoustic method “acoustics, it is a technique that applies sound and its properties in water masses study.

To get information, it uses a device called an echo sounder, which works with a transmitter and receiver for sound signals. This device emits acoustic waves that travel in water, colliding with all the organisms and particles that it finds in its path; each one of these obstacles that sound waves encounter emit an echo that when received and with a data collection program is translated into images called echograms that represent the underwater ecosystem ”

IFOP staff is made up of 15 people, 6 Scientific Observers, 3 acoustic researchers, 1 fishing captain and 5 crew plus Chilean Navy.