Dr. Carlos Montenegro explained “COLACMAR 17th edition had a very extensive scientific-technical program based on regional marine environments and their resources characteristics in Latin American countries. Therefore, several topics were selected, which are currently central discussion and study focus by Marine Sciences area researchers, issues that were part of the Thematic Symposiums (Workshops) that were developed. The event program considered the realization of important talks and conferences of regional and global interest, with the aim of enabling greater integration among researchers from knowledge different areas. The central topics provided congressmen current methodologies access and techniques to broaden their knowledge and to get to know oceanographic environment tendencies from several areas, as well as the state of the art presentation of the international and regional policies directly related to the Ocean Sciences”. 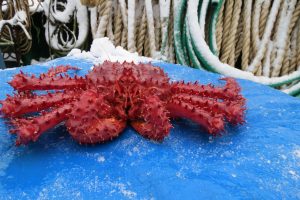 Artisanal benthic crustaceans fishery, highlights Litholae santolla spider crab, as one of the resources with greater economic impulses in the artisan sector of the X region. The increase of crabs extraction activity observed in the X region, has generated an increase in fishing efforts, which reflects  in a greater number of traps used for extraction, and therefore, requires greater availability of baits to prime these traps. It has been determined that bait availability is a limiting factor in fishing operations.

In relation to answering the question “What is the ideal bait for crabs extraction ?, our objective was to investigate what is spider crab preferred bait, to determine what would be a viable option, which characteristics that include: Availability, adequate prices and resource capturing feasibility. Tests were performed with 3 bait types (Autral Hake, Mytilus sp and cowhide). There was artisanal fishermen collaboration, who provided a line of Magellanic traps to carry out the 3 experiences during the highest catches months, between September and November 2016.

The first results showed that chances of catching crabs increased significantly when using southern hake waste, as bait for traps. These results are the first obtained for X region zone . What is sought is to establish scientifically, criteria for the correct bait use in this fishery, with a clearly ecosystemic approach, and that can be incorporated into this fishery management plans.

Andrés Olguín “Historical analysis of Metacarcinus edwardsii biological fishing aspects (Bell 1835) (Decapoda: Brachyura): Contribution to main species of crab exploited in Chile management “. Information generated from constant monitoring of this species within the programs ” Bentonic Fisheries Follow-up ” and  Bentonic Crustacean Fisheries Follow-up “, whose main objective is to provide data and basic information that contributes to scientific advice foundation in decision-making processes, a fundamental aspect for fisheries management is to achieve benthic resources conservation and sustainability, including this species. Theme that the organizers of the Congress were very interested in knowing how information gathering was taking place in our country.

Capture procedure is described and adult southern sardine (Sprattus fuegensis) specimens acclimatization. The preliminary results of measurements on their eggs and larvae obtained from the spawning produced in captivity conditions are also presented. The specimens spawned spontaneously during the first night after their capture, probably due tohandling stress. Southern sardine eggs are spherical, with an average diameter of 1.00 ± 0.05 mm. The larvae hatched between the fourth and fifth days after spawning occurred with an average length of 3.56 ± 0.34 mm. The yolk sac reached an average volume of 0.18 ± 0.033 mm3 and was completely absorbed on the third day after hatching (dpe) of the larva. The average egg size of S. fuegensis is lower than previous reports made with field samples, obtained from lower temperatures. The larvae only grew during the period of endogenous feeding (<5 dpe) at a rate of 0.42 mm * d-1 and died 6 dpe, probably due to inadequate feeding conditions of the culture medium.

Stress variation and its relationship with serological levels of three species of pelagic sharks in Chile in longline catch and release practices.

In Chile, pelagic sharks are related to highly migratory fisheries resources. The most common species are mako shark shark (Isurus oxyrinchus), porbeagle (Lamna nasus) and blue shark (Prionace glauca), which are regularly subjected to release practices by discarding. These practices can be successful depending on the stress conditions the individual is in, which can be expressed in qualitative and physiological responses. To relate these parameters, an accumulated Logit multinomial regression model was applied, which seeks to relate the serological analyzes obtained from live captured sharks and their capture condition according to the scale of Hueter and Manire (1994). The results showed that the variation of glucose and creatinine in the blood help to explain significantly the observed capture condition. In this way, the higher the concentration of glucose in the blood, the greater the likelihood of finding a shark with an excellent / good condition. On the other hand, the variation of creatinine concentrations indicated that, while increasing the concentration of creatinine in the blood, the probability of finding sharks in regular / bad condition increased.

This is the first experience in Chile that considers measuring stress indexes and their relationship with serological changes experienced by pelagic sharks, through models that integrate physical parameters with qualitative observations.

This work presentation purpose is to motivate marine resources space representation states use in order to model population dynamics over time. This representation has the great advantage of being able to incorporate in a natural and intuitive way population dynamics model chosen to study a particular species and in turn to explicitly incorporate functions that relate observed data with unobservable latent variables (annual population abundance ). In this representation, unobservable states and evolution and observation parameters functions have the same statistical nature, that is, they are model’s parameters. In addition is encouraged, class of mix probability distributions use on asymmetric normal scale, which includes a wide range of probability distribution families, such as skew-slash, skew-t, skew-normal, among others, in addition to its multiplicative variants log-skew-slash, log-skew-t, log-skew-normal. Parameters estimation can be done in a classical paradigm through Laplace approximation to integrate over latent states, while Bayesian inference can be made through Markov chain Monte Carlo (MCMC). For the first you can use ADMB free statistical modeling platform and for the second you can use OpenBugs platform, which is also free. Application results from this modeling approach are shown for red shrimp resource in south-central Chile.