The Eighteenth International Conference on Harmful Algae (ICHA) was held from 21th to 26th October 2018 in the city of Nantes, France, bringing together more than 750 participants from 64 countries. In this Conference, 7 researchers of the Harmful Algal Studies Center (CREAN) of the Institute of Fisheries Development (IFOP), presented 6 oral presentations and 3 posters, about various themes of Harmful Algal Blooms (FAN), covering four main topics : Biological oceanography, Ecology, Global Change and Impact of microalgae on Aquatic Organisms.
The instance, allowed to update knowledge status and to discuss importance and impact caused by harmful algal blooms in aquaculture environments of different regions of the world. In addition, to value the numerous participation of CREAN of IFOP during this congress, which positions it as the national institution that presented more work in the most important conference worldwide on FAN. The nineteenth conference is scheduled to be held in Mexico in October 2020. 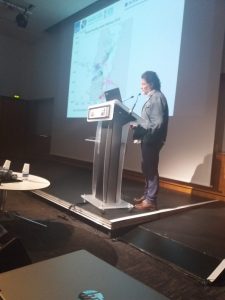 Two were carried out in the session “Biological Oceanography and Limnology on Harmful Algal Blooms” where researchers Leonardo Guzmán M. and Oscar Espinoza G. presented research works related to atmospheric and oceanographic processes in the distribution and abundance of Alexandrium catenella in the northern area of the fjords, including the Pacific Ocean, both of the flowering occurred in 2016 and that registered during 2018.

In the session “Ecology – from Ecological Niche to Population Dynamics and Biogeography”, researchers, Gemita Pizarro N. and Pamela Carbonell A. presented about decadal and bidecadal distribution of harmful species in Magallanes region and on the “Toxicity and toxin content of Alexandrium catenella in natural populations of southern Chile”, respectively.

In the session on “Ecology – Harmful Algae and Global Change”, researcher Rodrigo Martínez G., presented a work related to “Large-scale climatic patterns and their relationship with harmful algae blooms in fjords and channels of southern Chile.

Finally, in the session on “Impact of Microalgae / Cyanobacteria on Aquatic Organisms, (including Fish and Shellfish Mortality)”, the researcher Jorge Mardones S., presented a contribution about the growth dynamics and ichthyotoxicity of Pseudochattonella verruculosa, microalgae responsible for the massive mortality of salmonids in the summer of 2016.

Regarding contributions in poster format, researchers Gonzalo Fuenzalida D., Gemita Pizarro N. and Carolina Toro R. presented research works related to the “Mortality of whales in the Gulf of Penas and the possible responsibility of microalgae”, “Abundances of the microfitoplankton and Alexandrium catenella in relation to climate-oceanographic indices in the region of Magallanes “and” Harmful species associated with massive mortalities of Atlantic salmon during their transport through the Gulf of Penas “, respectively.