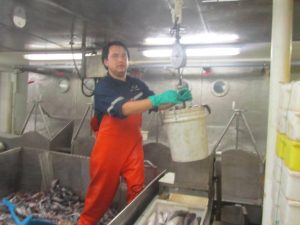 Robert Bello is the scientific observer of Instituto de Fomento Pesquero, who will be in charge of monitoring

In the Southeast Pacific, one of the largest gaps in the knowledge of marine mammals is the lack of information on abundance and population trends of the vast majority of species.

This information is critical to define management strategies to ensure the viability of these populations in the long term. Also, it is known that human activities are affecting some populations of marine mammals in the region, due to interaction with fisheries, collisions with vessels and marine pollution. Many of these populations are highly migratory, as in the case of the humpback whale; some such as the blue whale and the right whale are considered as threatened, and others are widely distributed as sperm whales and most dolphins, whose range of action usually includes the territorial waters of more than one country. Therefore, it is necessary to generate a knowledge base line at the regional scale to track these populations to promote conservation throughout its range of distribution.

In response, the Permanent Commission of the South Pacific (CPPS), since 2014 on, through the Office for the Coordination of the Action Plan of the Southeast Pacific, is developing a joint project with researchers from Southwest Fisheries Science Center (SWFSC) of National Agency for Oceanic and Atmospheric Administration of US (NOAA-NMFS) to train researchers in the region to estimate abundance of marine mammals.

One of the first activities to generate skills was the implementation of “Training course on best practices to collect data to estimate abundance of Marine Mammals”, where Instituto de Fomento Pesquero (IFOP) participated.

Dr. Jaime Letelier, Head of Department of Oceanography and Environment states that “one of the conclusions of this course was the identification of the “Regional Program of Jointly Cruises” as the most appropriate research platform to conduct estimates on abundance of marine mammals on a regional scale. In the same way, it was agreed that an observer will be included for the upcoming campaigns.

This was ratified by all member countries, at the Meeting of the Parties at the Convention of Lima (November 2015). 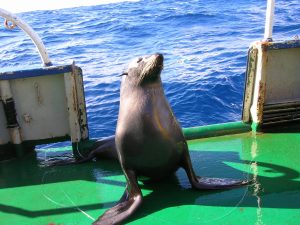 Chile, in response to these international commitments, the Undersecretary of Fisheries and Aquaculture, together with IFOP, incorporated a scientific observer in the cruise “Bio-Oceanographic Conditions and Evaluation of Anchovy Spawning Stock between the XV and II Regions 2016″ (which set sail yesterday), full-time dedicated to monitor the abundance of Marine Mammals, the working platform will be the scientific vessel Abate Molina.”

The Scientific Observer, Mr. Robert Bello, participated in the training driven by CPPS, so has the needed skills to develop this activity.

He is a marine biologist at the University of Concepción, member of scientific Observer staff of the program “Discard research program and bycatch”

He attended the workshop on “Best Practices for estimating the abundance of marine mammals,” which was in charge of Southwest Fisheries Science Center (SWFSC) researchers, under the National Oceanic and Atmospheric Administration (NOAA) institution, organized by the “Permanent Commission of South Pacific “(http://cpps-int.org), which was held in Guayaquil, Ecuador.

Dr. Jaime Letelier concluded that “this activity strengthens Chile’s participation in the CPPS, while reinforcing the partnership with NOAA-NMFS”.