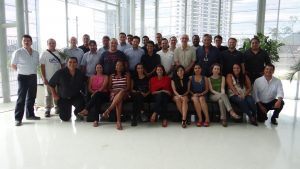 Patricio Barria, researcher of Instituto de Fomento Pesquero, participated in an international workshop for Non-Detriment Pronouncements (NDP) of sharks and rays, in which the progress of Latin American countries were detailed.
In the city of Santa Marta, Colombia, the “International Workshop on the Development of Non-Detriment Pronouncements (NDP) of sharks and rays included in Appendix II of CITES: Limitation and Challenges for its construction and application” was held. The event was organized to show the progress of NDPs on sharks and rays in Latin American countries, and strengthen capacities for the implementation of these instruments in the areas of research, monitoring, management and marketing. The workshop was organized by the Environment Government Department and Sustainable Department of Colombia (MADS), as authority of CITES Colombia and the Institute of Marine and Coastal Research “José Benito Vives de Andreis (INVEMAR) as scientific authority.

Patricio Barria, researcher of IFOP, who attended as special guest to the workshop, said “the importance and challenges at national and international level of this instrument, which allows sustainability and conservation of shark populations and allows the export of specimen found in Appendix II of the Convention on International Trade of endangered species of wild Fauna and Flora (CITES).

The aim of this meeting was to present the progress of NDPs on sharks and rays in the countries and make a balance on the limitations and challenges for construction and implementation, which are vital for the implementation of the regulations related to controlling international trade of sharks.

During the event, we had the chance to see the progress made by different Latin American countries such as Mexico, Colombia, Venezuela, Ecuador, Peru and Chile, regarding the management, monitoring, research and marketing of sharks. Several presentations were carried out on the quantity and quality of information from five shark species, included in Appendix II of CITES (Carcharhinus longimanus, Sphyrna lewini, Sphyrna zygaena, Sphyrna mokarran y Lamna nasus).

In addition, a comprehensive review was performed of population history of these species related to their exploitation, geographical distribution, population units in the Pacific Ocean and the Caribbean region. Also, cadastres were developed on existing information, and gaps of scientific information were established by species and country, and research priorities were stated to cover these gaps; also based on the information available, probable analysis were suggested to know the status of these populations, either quantitative analysis of poor or rich data ”

“As conclusion of the workshop, in every country there is concern about the sustainability and conservation of populations of sharks and rays, and efforts are made to develop and implement these instruments to ensure the survival of these species. In the different countries, the progress is heterogeneous, but it was noted that the limitations are being overcome, either human resources, infrastructure and financing. For the implementation of NDPs on sharks and rays, inter-organizational management is key for coordination among the different governmental and private actors, in order to enable this public-private agreement” ended researcher of IFOP.