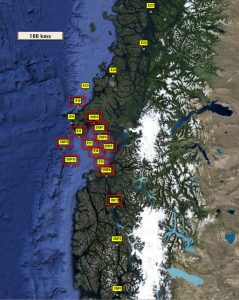 In a sampling carried out between February 16 and 24 on board the OPV-83 “Marinero Fuentealba” from the Chilean Navy. The INCAR is also working on samples collected during this cruise.

At the end of January 2017, mortality of thousands of salmon for fattening and adults occurred; they were being transported in wellboats sailing in the waters of the Golfo de Penas. Initially there were reports of a probable flowering of microalgae that generates toxins harmful to the fish, and tentatively the dinoflagellate Karenia mikimotoi was identified. The event activated the Servicio Nacional de Pesca y Acuicultura institution for setting up a monitoring and to look for antecedents that confirmed the presence of this microalga.

During the 8 days of the cruise, oceanographic data collection and water samples were collected in a total of 21 sampling stations, to identify and quantify the present microalga, as well as to record data on physical variables such as wave height, meteorological conditions such as wind speed and direction, atmospheric pressure; and water samples were collected to estimate chlorophyll, toxin and nutrient concentrations. During the cruise, a preliminary observation was made through microscopy of the collected samples.