It has been possible to detect them through the monitoring activities carried out by the Instituto de Fomento Pesquero (IFOP).

Southern austral fjords show an apparent increase in the frequency, geographic coverage and intensity of noxious algal blooms in the last five decades, which is known as red tides by common people. At Los Lagos region, particularly at the island of Chiloé, there was a strong awareness of this type of events, after intense blooms during the summer and fall of 2016, linked to the microalgae called Pseudochatonnella verruculosa and Alexandrium catenella . Both had a marked impact on the social and economic environment of the region.

In this context, and since at fjords and channels, harmful events are common to occur, it is important that the inhabitants of the south of the country, know what is occurring with these blooms and in this way, gradually learn to live with them.

During the first two months of 2017, several blooms have occurred, and those caused by Pseudonitzschia cf. Australis, Dinophysis acuminata and Karenia cf. Mikimotoi, constitute different situations and reflect the dynamics of what is happening in this vast sector of the country’s geography. In all of them it has been possible to detect them through the monitoring activities carried out by the Instituto de Fomento Pesquero in the three southernmost regions of the country, although the last one has occurred in an area of very difficult access, such as the Golfo de Penas, and for the same reason, it is a sector that is not monitored.

Cf. Australis, is a diatom that is associated with the amnesic venom of shellfish (domoic acid) and has been in flowering condition on the southeast and west coast of the island of Chiloe from Cucao to Isla Tranqui (see attached figure). Amnestic venom outbreaks are localized and of short duration, of the order of 2 weeks. During some weeks of February this microalgae reached very high densities, both in the inland sea of ​​Chiloé, particularly the southeast of the island, and on its coast exposed to the Pacific Ocean from Cucao to the south. Currently this flowering is in its phase of decline.

Acuminata, is a din flagellate, which in the Los Lagos region, is associated with a lipophilic toxin, known as pectenotoxin. But it is a microalgae that shows different profiles of toxins throughout the country, for example in the region of Magallanes, in addition to pectenotoxins, also produces ocadaico acid and dinofisitoxinas, the two latter corresponding to the diarrheic venom proper. This microalgae at the end of January showed very high abundance throughout the northern area of ​​the Inland Sea of ​​Chiloe from Seno de Reloncaví to the south till the Talcan Islands (see attached figure). This flowering is also in its declining phase.

Cf. Mikimotoi, is also a dinoflagellate, associated in the last weeks with mortalities of smolts and adult salmon, while they were transferred in wellboats for their processing or for their fattening. All of this occurred in the Golfo de Penas area. As a consequence of this and since there is no regular monitoring in that sector, by initiative of the Servicio Nacional de Pesca and Acquaculture, the opportunity appeared to participate in two cruises in that area on board vessels of the Chilean Navy, the OPV Marinero Fuentealba and PSG Contramaestre Ortiz, the first sailing from Punta Arenas and the second from Puerto Montt. At the time of writing this note, both cruisers have already returned to their respective ports of departure. Both cruises covered different areas of the gulf, and as a consequence of this, it is expected that more information regarding this flowering may be available. Although there are records obtained by the IFOP that show that this microalgae in addition of being detected in the Golfo de Penas, was observed in the sector of Tortel and in the extreme north of Magallanes (see attached figure, red box and microalgae photograph), South of Golfo de Penas, in samples collected during the OPV cruiser M. Fuentealba. 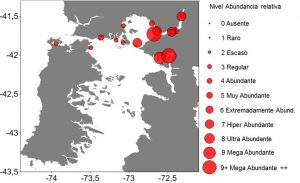 Relative abundance of the species Dinophysis acuminata for the period between 24-30 January in the area of the Seno de Reloncaví, Calbuco and north of the Island of Chiloé. 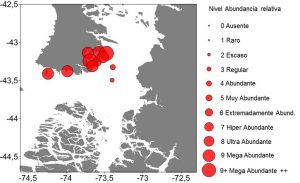 Relative abundance of the species Pseudo-nitzschia cf. Australis for the period between 6-8 February in the southern area of the Island of Chiloé.