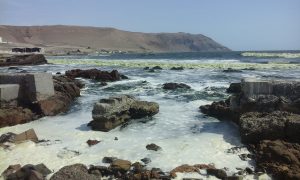 On February 21, a discoloration of deep green color at sea water was detected at La Lisera beach and other coastal areas in Arica. Because this sector has an intense concurrence of public, a concern was generated about a possible Harmful Algal Bloom.

Personnel of IFOP Arica took samples in the sector of Los Gringos Beach, located about 1500m south of La Lisera beach. The samples were sent to the Laboratory of Analysis of Phytoplankton and Red Tides of the city of Puerto Montt, where they were analyzed on Februray 27. This responsibility was in charge of the researcher Ximena Vivanco. 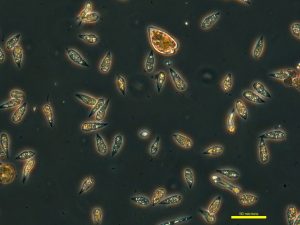 The review of the samples resulted in a flowering state of microalgae of the group of euglenophyceae, unicellular flagellate organisms of greenish color, and of very variable form because of its great elasticity during its displacement. There are freshwater and marine species, but they pose no risk to human health, as they do not produce toxins of any kind.

It is suspected that the type of organism that was present in this event would correspond to Eutreptiella, typically marine euglenophyceae; being the two more likely species: E. eupharyngea or E. gymnastica, but to discriminate between both will require more complex microscopy techniques and review of living and in good condition organisms. There are antecedents of E. gymnastica producing discolorations greenish to yellow greenish when it proliferates in other parts of the world.