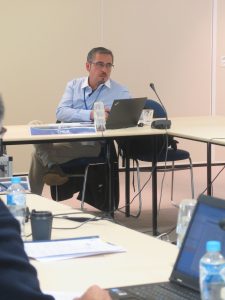 This meeting aim is to develop a framework or methodology of scientific assessment to estimate the impact of the deep-sea fisheries on fish stocks and the ecosystems that occur in the area of the Convention of the OROP PS. The conclusions reached at the workshop will be presented to the next meeting of the Scientific Committee of the OROP PS in September in Shanghai, China, which if approved will be elevated to the OROP PS Commission which will be held at the beginning of 2018 in Peru.

The chairman or president of the meeting is Mauricio Gálvez, Chief of IFOP Division of fisheries research, who was elected chairman of the Working Group of Deep Water last year at the Scientific Committee meeting held in the Hague, Netherlands. He also attended IFOP professional meeting. Renzo Tascheri who is currently doing his PhD studies in Hobart. The meeting was attended by scientists from Australia and New Zealand, who are mainly those who carried out more research in the area of the OROP PS on deep-sea species.

Consulted Mr. Gálvez, about the activity he indicated “we are dealing with two major issues at the meeting: deep-sea fish stock assessments, representing a great complexity to be addressed since various aspects of its population dynamics are unknown.” The objective in this respect is finally advise the Commission regarding what is the State of fish stocks and what steps must be taken (fees) to ensure sustainability. On the other hand, we are addressing the issue of vulnerable marine ecosystems: here the complexity is in the scientific methods to predict where are those ecosystems, since they can not be directly explored throughout the South Pacific. Another important issue is how much of those vulnerable marine ecosystems would the Organization like to protect?”