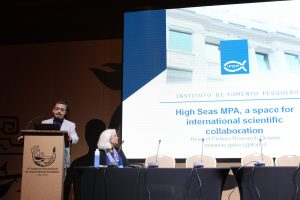 It was organized by the Ministry of the Environment and the International Union for Conservation of Nature (IUCN). The Secretariat of Fisheries (SUBPESCA), National Fisheries Service (SERNAPESCA), National Forestry Corporation (CONAF), National Tourism Service (SERNATUR), DIRECTEMAR, Subsecretariat for the Armed Forces, Ministry of Foreign Affairs, Institute of Fisheries Promotion (IFOP) and Chile Image Foundation, Universidad Católica del Norte and Pontificia Universidad Católica de Valparaíso. In addition, the important sponsorship of the Wildlife World Fund (WWF), plus the collaboration of Wildlife Conservation Society (WCS) as NGOs and active partners.

IFOP was part of the Chilean Pavilion, presenting the topic Areas of management and its role in Coastal Conservation

Researcher Luis Ariz, head of the management areas section, referred to the activity carried out by IFOP in the Chilean pavilion “the AMERBs, contribute to conservation” was the question that focused the development of the conversation, in a first panel, representatives of the SSPA, SERNAPESCA, NGO and IFOP, agreed that AMERB are a contribution, an issue that is relevant in comparison to free access. It is reflected in recovery of overexploited species, and recovery of trophic weeds. They considered that the dissemination of what the AMERBs should be, to the public, should be improved, and that it should be incorporated into the framework of formal education, in order to raise awareness of the coastal marine environment in which AMERBs are developed.

A second panel gathered the opinion of representatives of artisanal fishermen, users of AMERB, with vast experience in the subject, from the beginning of the regime. They agreed that AMERBs helps conservation, favor friendly treatment with the environment, and have allowed us to generate functional objectives that translate into better management of organizations. They agreed that any initiative aimed at the creation of AMPs should be the product of a process that includes artisanal coastal fishing.

Presentations at the international workshop

Mauricio Gálvez, head of the aquaculture division, offered a talk at Alianza de Altamar Symposium in which he highlighted the main achievements in fisheries research issues, based on the unity and perseverance of researchers and the work of the state. 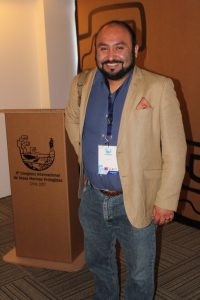 IFOP’s Researcher Luis Figueroa, presented the theme “The beginning of the end of the conservation vision in TURF? The extraction of seaweed in areas of management and exploitation of benthic resources on the Chilean coast “, which aims to highlight the importance of brown algae in its faculty of structuring of marine ecosystems and of great impact on biodiversity. For these effects, the evolution of brown algae extraction in management areas, based on density, biomass and disk diameter, will be analyzed, discussing the implications that this can cause in the marine ecosystem.

Researcher Pedro Romero showed “Do AMERBs contribute to conservation? Evaluation from the economic and organizational perspective. The Management Areas are a regime that gives fishermen’s organizations a right of exclusive use over space for the purpose of managing and conserving resources of commercial interest. However, efficiency is only achieved when economic incentives are generated for users.

During the period 2014-2016, an economic evaluation was made to 90 organizations and 389 fishermen, resulting in 82% of the time the activity of the AMERB generated sufficient economic income to encourage the preservation and protection of their respective areas, being a economic complement to the portfolio of activities carried out by users. 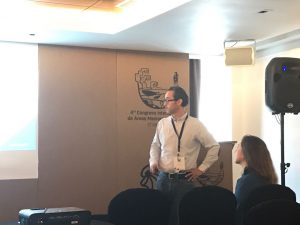 Dr. Rodrigo Vega, IFOP researcher, focused his presentation on the white seagrass, Ardenna creatopus, a specie that is classified as endangered by Chile and as Vulnerable by IUCN, with an estimated global population of 56,000 individuals. The bycatch of this species is considered to be one of the most important threats. The white fawn is endemic to Chile, nesting only in the Juan Fernández (JF) and Mocha Island archipelago. Using miniature GPS and satellite transmitters, whitefly feeding areas have been determined during breeding periods in 2002-2006 at JF and 2015-2017 at Mocha Island.

“In this work he showed the results of the monitoring and research activities in the marine reserve of Putemún in the last 15 years. These results focused on environmental conditions, circulation patterns, seed collection, characterization of the shoe bank in the reserve. In addition, the results and challenges of the reserve were discussed in the context of marine protected areas. “