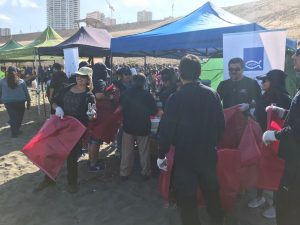 Within the framework of the International Beach Cleaning Day, a work team from IFOP Iquique participated cleaning in Playa Huayquique, the activity was organized by the Chilean Navy

Eliana Escudero, head of IFOP Iquique headquarters explained “Our participation in this type of activities is important since the Fisheries Development Institute as the State’s scientific advisor, in fishing matters, aquaculture and marine ecosystems conservation, we must create people’s awareness and foster our oceans care, so affected by climatic change and unwanted elements accumulation.

In the activity garbage of all kinds, plastics, cigarette residues, decaying food, beverages and beers cans were collected, we hope to have contributed a little bit, to create awareness of the care of our oceans, much remains to be done …

I hope that COP 25, of which we will be an important part, will reach agreements worldwide to address these issues.