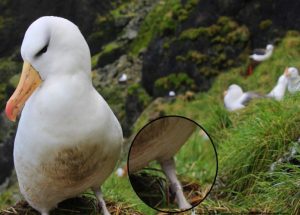 This Albatross was recaptured aboard an artisanal longline vessel near Isla Choros, at Coquimbo Region and monitored by Luis Díaz Báez, IFOP scientific observer, as part the Highly Migratory Resource Monitoring project activities – ecosystemic approach directed by Dr. Patricia Zárate. The albatross had identification rings on both legs and was in very good condition, so after being registered and measured it was released by Luis Díaz.

“Time elapsed between marking and recovery was almost 9 years, the bird traveled a linear distance of 9350 km, information delivered by the ABBBS. This bird would correspond to a juvenile as it is known that albatrosses reach sexual maturity between 7 -10 years and comes to feed at our shores, and once it reaches sexual maturity should return to their area of origin, these animals have a high tendency to return to the place where they were born “explains Dr. Zarate.

Black-browed albatrosses of Mcquarie Island have low reproduction, there are fewer than 50 pairs nesting in a small part of island southwest, says Dr. Kris Carlyon of Marine Conservation Program of Wildlife Management Branch (Australia), who I was very surprised and happy for the news of the albatross recapture. According to their records, this corresponds to the first black-browed albatross on the west side of the Pacific that has been recaptured in the southeast Pacific.

This species is considered worldwide as a “Minor Concern” bird (IUCN Red List, 2018). Chile is part of Protection of Albatrosses and Petrels Agreement (ACAP) and is committed to maintaining a favorable conservation status for albatrosses and petrels that are registered in our coasts.

Luis Díaz, IFOP scientific observer who found the bird narrated “on his right leg I noticed that he was wearing a tag ring so with the help of some crew members we proceeded to take the data that the ring had engraved to send to the project chief ”
In addition, Dr. Zárate adds that it is important to emphasize that scientific observers are the cornerstone for information collection on fisheries and their interaction with seabirds and other groups of animals, and congratulates the work done by Luis Díaz.