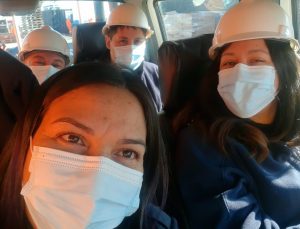 Yael Cisternas became the first female IFOP scientific observer to embark on a factory ship for 51 days. This southern demersal fishery also takes place in the rough seas of the southern part of our country, which becomes an extra challenge to develop scientific work.

This event marks a precedent in the field work on board, directed by sampling management department, and confirms, at the same time, that gender roles can be diversified, and thus integrate more female observers to the component of sampling relative to the fleet of factory vessels in the country.

Gonzalo Muñoz,Sampling Management Department (DGM) (S) Head pointed out that for several years now Fisheries Development Institute (IFOP) Scientific Observers (SO) have been incorporated into field work on board, in order to the vessels of the great fishing fleet of our country. In a first stage, from the year 2000, in industrial warehouses in the south-central zone with sufficient independent accommodations for them, which carry out extractive activities, mainly in their base ports vicinity of and, therefore, limited fishing trips in time. And then, over the years and, especially due to his good performance, professionalism, responsibility and quick adaptability to work on board, added to the greater demand for biological and fishing information by Fisheries and Aquaculture Undersecretary (SSPA), they were also incorporated into artisanal fleets, specifically in launches, which have operational characteristics similar to those of ships. 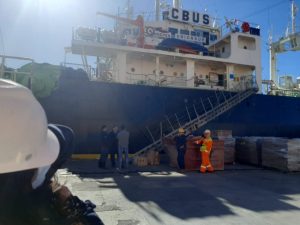 However, until the recent trip made by the scientific observer, Yael Cisternas Céspedes, marine biologist (E), on board UNIONSUR factory ship, Fisheries Development Company (EMDEPES) records, no observer from the institute had embarked in a ship of these characteristics. large size (105 meters in length, length) and with the particularity that she processes and preserves her catch on board (mainly in surimi format), which makes it easier for her fishing trips to extend over several months.

Yael added “in general terms, it has been a great learning experience for both parties and a demonstration that the incorporation of female personnel as part of the crew is not an impossible niche to include and explore, where the skills of both genders instead of collide, they manage to complement and adapt according to the needs that arise, where the main pillars for this great achievement are based on respect and agreements, the same pillars that sustain our society. This being the first step for the incorporation of female personnel in industrial vessels and finally in the fishing world.