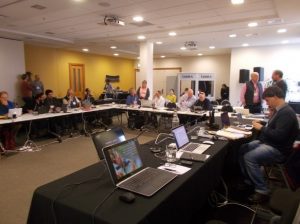 This is an international meeting to share work and research results, review some rules and procedures in addition to plans and programs, and begin preparation for the tenth meeting of the Advisory Committee for the Agreement on the Conservation of Albatrosses and Petrels (ACAP) to be held in the same city between the days 11 to 15 of September.

About 50 members participated some of them official members from the secondary capture gruoup, and also the participation of registered observers from countries that are not participating in this agreement (Japan, United States). Igor Debski (Vice-convenor) New Zealand’s Conservation Department, and Sebastián Jiménez (Vice Convenor) from the National Direction of Aquatic Resources, Uruguay, was responsible for moderating and bringing to good terms all deliberations and discussions that took place during the meeting. 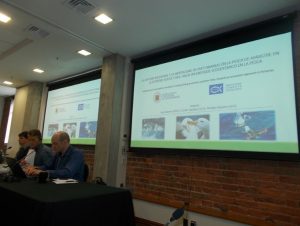 Marcelo García, professional from Subpesca Conservation and Biodiversity Unit, highlighted the meeting’s progress in terms of mitigation measures for incidental bird by-catch in Chilean fisheries. “Seabirds mortality is a subject of great interest in all the fishing forums around the world, where our country has been taking actions for more than a decade to reduce its impact. It is under this line that Governments from New Zealand and Chile are drafting a Understanding Memorandum for the conservation of shared seabirds, to coordinate joint and collaborative work in the search for solutions to reduce bycatch in fisheries. ”

Luis Adasme, professional of IFOP Fisheries Evaluation Department, stated that “participating in these instances is very valuable for Chile and particularly for the Institute, because they allow knowledge exchange with other researchers in the area, mitigation of bycatch and best practices in relation to bycatch of seabirds in fishing operations, as well as show the work that Chile and the Institute develops around this research line, which is aligned with the ecosystemic approach which drives the current fisheries law (LGP).

Meeting with the Ambassador 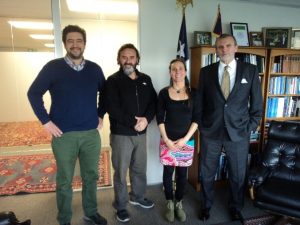 The Chilean delegation met with New Zealand Chilean Ambassador, Rodrigo Espinosa, who was very interested in supporting any agreement or bilateral support agreement on albatross species research that are part of ACAP agreement and are visitors with heroic journeys from New Zealand to Chile.

The Chilean exclusive economic zone covers a considerable section of the Humboldt Current, which represents one of the most productive marine ecosystems in the world and an important assiduous feeding zone for 15 species of albatrosses and petrels included in ACAP. Also, under its jurisdiction it has several world-wide relevance reproduction sites, that comprise 21% of the world-wide population of the black-browed albatross.