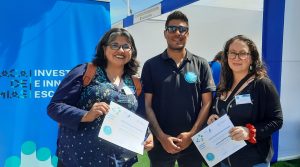 Marianne explained “I was invited to participate as an evaluator of this student debates these debates take place between different schools and high schools in Tarapaca’s region, these were convened at Iquique’s Museum. This type of student debates aim on creating a critical power in young people, which allows them to argue their points of view on a specific topic.

From an evaluative point of view, we had to score different items that we were asked to evaluate and deliver a constructive critical opinion to young people. The schools with the best evaluation in each of the days went on to the next level. The final of these debates will be held during the first week of December.

“In the XVIII School Research and Innovation 2022 Explora Regional Congress we were invited to participate because we belong to the evaluation committee, an evaluation that consists of two stages:

Marianne commented “it was a pleasant moment to be able to share with young people’s thinking to contrast their ideas to encourage them to continue, that even if they are nervous and forget some concepts, it is valuable that they are there and train in public speaking and knowledge. 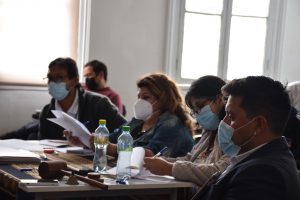 Graciela added “it was a very pleasant experience for both of us, we were surprised by young people’s ability to develop and translate their ideas into research and innovation work. The participants were from elementary and high school. The ability to explain their projects was exciting and produced a re-enchantment with marine sciences.

The different works which reached this stage were of high quality and useful for the region, without a doubt scalable to be carried out with public and/or private financing”.

Both researchers agreed that “IFOP workers have a tremendous capacity for knowledge that we must deliver to young people and children who are interested in science. Promoting knowledge among young people is of vital importance, taking into account that with current technology they can enhance their knowledge and thus contribute in the future.

This type of event allows us as an Institute to show to the community research work in different marine and fishing areas. In addition, it allows us to transmit generated knowledge”.

Graciela Pérez: background: She is an UNAP Marine Biologist, Master in Marine Sciences UCOL, Mexico. She has participated in the Explora projects since 2016 representing the institute.

Marianne Lichtenberg: She is a Marine Biologist-UDEC, MSc. (c) Biostatistics and Bioinformatics, CEMP-U. Murcia, Spain has participated in dissemination with the Explora project since 2019 representing the institute.