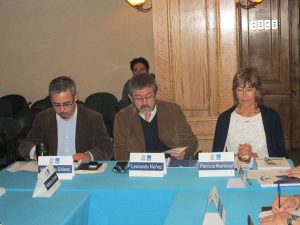 At this meeting will review and coordinate the agenda of the scientific work carried out by the technical groups in the period 2016-2017 and 2017-2018 period.

The third annual meeting of the scientific coordination of the cooperation agreement between “Chile (IFOP) Fisheries Development Institute and the National Institute of research and fisheries development of Argentina (INIDEP)” will be held on May 15 and 16th at IFOP Auditorium Valparaiso.

This inter-institutional cooperation agreement was signed in 2014, after more than one decade of joint work, and seeks to generate knowledge on marine resources for sustainable management and improve decision-making. It is important to mention that many of the southern marine resources are the same in Chile and Argentina for which joint research is transcendental.

Leonardo Núñez, CEO of IFOP said that “For IFOP these seminars with INIDEP deepen the knowledge on the demersal fisheries common interest, in order to generate the best recommendations to our authorities for its sustainability”

Patricia Martínez, INIDEP Argentina researcher said “This is the third meeting we held. While there were many instances of joint work by more than 17 years. Reality is that this agreement is to formalize all these collaborations and scientific exchanges.”

Ignacio Payá IFOP researcher added “during this meeting investigations on the tail hake maturity and implementation of statistical models of status-space type, that allows to model changes in the functions of maturity per year and Ocean as random errors. The results of the comparison of readings of age based on otolith exchanged between both institutions will also be presented. Advances in comparison index of relative abundance based on commercial catch rates and the biomass estimated by hydroacoustic methods will be revised in three fins hake. In the case of rays shall be informed on leads monitoring systems of each country. In addition, this year crab fisheries analysis is incorporated into the Convention. Finally, it will define the Chronogram of activities to be carried out in 2017-2018, and the report of the meeting shall be drawn up. After the coordination meeting will be held a workshop of two days on the maturity modeling hake tail”.

Francisco Contreras IFOP researcher was elected Convention Coordinator and said “this is a great opportunity that allows us to bilateral work, together with the colleagues from the INIDEP. The agreement allows us to improve knowledge by working together and taking advantage of the experience of both institutions

In this sense, it is extremely important to continue with the analysis of the knowledge of the tail, three fins Hake Hake of the Southern Cod hake, Golden Conger, kite skate and crab in the cone South America