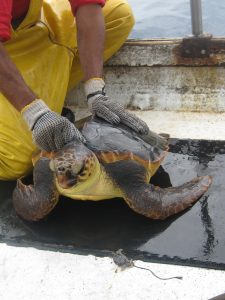 This aims to reduce incidental marine turtles capture.
April 11th a professional team from the Fishing Foment Institute conformed by Patricia Zarate, Jorge Azócar and Carolina Navarro with the Zonal Director for Fishing and Aqcuiculture (SUBPESCA), Marco Soto. They met with the Artisan Fishing Workers Association from Arica to analize the possibility of switching from “J” type hook to circular hooks in line fishing. All of these measures with the finality of reducing incidental capture of marine turtles.

Patricia Zárate PhD explained that line fishing held in Arica has high incidence over marine turtles capture. These are extinction endangered species with serious conservation problems and included on I Apendice of CITES and due to these facts require mitigation measures that could help to reduce their capture and mortality. 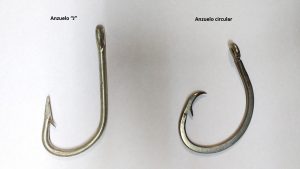 There are several researches over the world wich demostrate that circular hooks use diminishes marine turtle’s capture and mortality. Due to the fact that the circular hook clasp is rather superficial so there is less possibilities of hooking turtles. And also because they are harder to swallow by the turtles so they could have higher survival probabilities once freed after incidental capture. In Chile Harvestfish fishing is performed with “J” hooks and due to its characteristic form it is easily swallowed by turtles. The professional remarked that “the idea of switching to a different type of fishing hook came by the fishermen themselves. And such attitude is highly valuable due to the fact that they are very interested on diminishing the incidental capture of turtles. It is important to mention that Arica is considered one of the biggest marine turtles aggregation zone . One of the most important in Chile and its protection is very important for this zone onsidering that it grants higher value in terms of tourism and biodiversity.

This research is very important for Chile considering the fact that we are responding to international agreements with the Interamerican Convention for Protection and Conservation or Marine Turtles we are evaluating other fishing methodologies aiming to diminish incidental capture of these animals. This research result could be favorable. Meaning thar circular fishing hooks effectively would reduce tha amount of captured and dead marine turtles. At the same time it couldn’t be favorable for fishermen if the circular fishing hooks capture less fishing target or if they have negative results favouring other endangered species capture. If given these last two situations and even if marine turtles capture could get effectively reduced fishing hook use could not be changed. In that case we should strengthen cooperation with the fishing area. Manipulation measurements and liberation to improve survival of marine turtles on this fishing area.”
Other participating institution is the NOOAA – NMFS through PHD Yonat Swimmer whom had lead several researchs about fishing hooks such as the ones performed in Brasil, Costa Rica y Uruguay. Mrs Yonat will donate the necessary circular fishing hooks for this research to be performed.

The Fishing and Aquaculture Zonal Director Marco Soto, outlined Arica´s Fishermen Labor Association initiative in order to move toward changing fishing hooks in their labor in order to reduce incidental capture of turtles. This is an action that was considered at the Regional Meeting about Arica’s Turtles that was held some months ago. This specie is included at the Apendix I of CITES so it is necessary to take mitigation measures that will collaborate in reducing thir capture and mortality. In this direction IFOP collaboration is considered for this research since this institutions has outstanding professionals in this area.