The 1,000 thousand students program, is part of the CONICYT EXPLORA project, It is characterized by bringing researchers to schools so that children can understand scientific language, in a didactic and entertaining way and its does not see science as something unattainable. The professionals try to motivate children, through talks, to become future scientists. 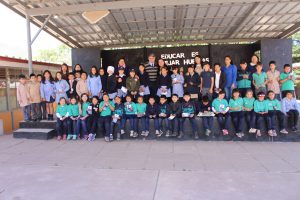 Researcher Victoria Escobar attended from IFOP she participated and told us “my motivation to be part of the activity has a great family influence, I was raised aware of environment’s transcendence and nature’s wonders. Later, my sister teacher in the area of ​​early childhood education urged me to convey youngest children about the importance of protecting the environment and how the experiences of early childhood greatly affect the future success of children. ”

Victoria dictated the talks “Don’t trash my house: the sea“ in Lagunillas basic cycle school of Casablanca. It tries to create knowledge in children of the importance of protecting the environment in this case at the sea, creating environmental awareness, awareness for the environmental protection, appropriate resources use such as water, garbage management problems, among others.

And the talk “I tell you how I develop in the sea” in the Alicahue Basic Cycle School in Cabildo this talk shows us the wonderful transformations that happens to different organisms that live in the sea until they become adults, which is the way they are commonly known. 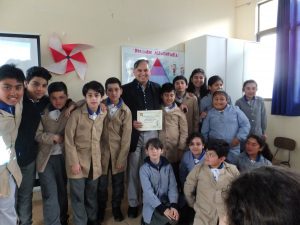 Andres Olguin, IFOP researcher, gave talks at King Edwards School and Liceo Mannheim, both located in Quilpue city, the talk “Jellyfish: Myths and Realities“. In this exhibition the biology of these beautiful marine animals was revealed, whose gelatinous body is made up of 98% water. Questions like What are jellyfish? What do they eat? Who eats them? How do they reproduce? they were answered through the audiovisual presentation. The talk is ready to interact with students and professors through entertaining true or false questions, which on one hand introduces us even more into the world of these beautiful animals and on the other hand demolishes myths and brings us closer to realities that many times are spoiled

Researcher Jaime Letelier gave a talk at Liceo Nuestra Señora de la Paz in Viña del Mar it was entitled IFOP: national research center in this talks he explains to students what is IFOP dedicated to, its objectives, the role in national fisheries research; he tells them that IFOP owns a scientific ship called Abate Molina in which our marine resources investigations are developed. Letelier commented his motivation to participate was “to spread the work of our institution and inspire young people to be interested in studying our sea through marine biology and oceanography” 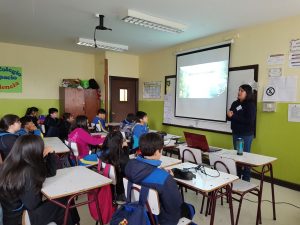 Romanet Seguel, marine biologist, presented the talk What are fjords? To students of 5 basic school Kalem de Aysén, Romanet explained “my participation in the Thousand classroom Thousand students initiative arises, when talking with children in the region and do not know the word fjord, as they are very important systems and they are also found only in 8 sectors worldwide, which have very defined characteristics. They are also rich in biodiversity (anemones, bivalves, huillines, whale feeders) and whose balance is being altered. These children live in a wonderful and unusual area of ​​which they have no knowledge, and I thought it fair to tell them in clear and simple language for their age. 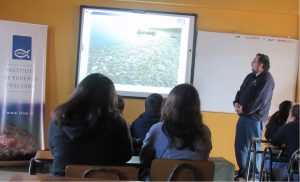 Cristian Villouta gave a talk at 785 School, Domingo Faustino Sarmiento from Lebu municipality, while Alicia Gallardo presented all the activities carried out by IFOP on the seas and oceans of our country at the scientific fair in Lebu.

Cristian explained “the presentation was made within World Science Day framework, organized by Explora Conicyt. Participants were municipal schools both public and private institutions linked to marine science.

They gave us the opportunity to make a presentation, which basically talked about marine pollution, specifically plastics pollution. The harmful consequences of the massive use of plastics are highlighted. escalation of microplastics was also explained, trophic chains, to be even ingested by humans “