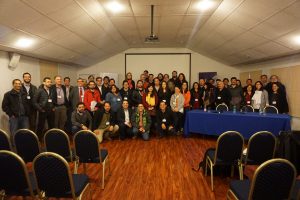 The workshop aimed to review research carried out in Chile in the areas of environmental pollution, aquaculture, fisheries and climate change. The Sub-Secretariat of Fisheries and Aquaculture (SUBPESCA), National Fisheries and Aquaculture Service (SERNAPESCA), the Central Bank of Chile, Environmental Defense Fund (EDF), Universidad of ChileUniversidad de Chile Concepcion, Pontificia Universidad Catolica de Chile and Pontificia Universidad Catolica de Valparaiso, among other national and foreign universities. In addition, this workshop had sponsorship of Enviroment for Development (EfD).

Elizabeth Palta, head of the economics section, referred to the workshop as “an important platform for disseminating research into natural resource economics at various research institutes and universities; particularly IFOP economic section has been invited to participate with its research in the field of fisheries and national aquaculture.

For its part, researcher Andrea Araya, highlighted “the knowledge transfer actions and methodologies updating, due to the participation of national and foreign researchers, with which they develop very enriching discussion days. On this occasion, during the activity days, importance of economic aspects in the use and management of natural resources, as for compliance and control of policies was highlighted. ”

Finally, Camilo Torres, IFOP researcher in fisheries and aquaculture economics, presented the paper “Impact on the direct employment of Salmon Farm Sector of Los Lagos Region because of the bloom of algae that occurred at the beginning of 2016”.this had the purpose of measuring the impact of the drop in production (ceteris paribus), on direct employment generated by the sector; as a consequence of the phenomenon known as “bloom of algae” that faced the Chilean salmon industry in the beginning of 2016. The econometric analysis was based on the production function of Cobb & Douglas (1928), under the assumption of short term analysis (constant capital in the productive process); thus, through the elasticity of labor, an attempt was made to measure the number of people who could be disengaged from the production process due to the decrease in production that affected the productive cycle of the Chilean salmon sector “