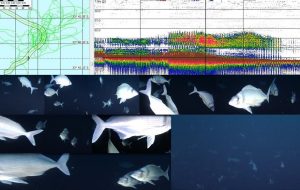 The image shows the shoals of bleak linked to the seabed, which were registered through scientific echo sounder between 90 and 132 m depth funds, linked to deepest seabed to 140 m and the corresponding underwater photographs.

The bleak is an important resource, which constitutes a major component of the bait in the lobster fishery of Juan Fernandez (Jasus frontalis), especially in the subsystem of Robinson-Santa Clara islands, where it is also caught for human consumption during the period of lobster closure; in this sector of the archipelago, a big fishing force is developed since there is a larger fleet.

Since last year, a team of Universidad de Concepcion and professionals of Instituto de Fomento Pesquero are investigating the bleak (Nemadactylus gayi) in Juan Fernández. It is funded by the Humboldt Chile GEF project. “Towards an ecosystem approach management of Large Marine Ecosystem of the Humboldt Current.”

The aim is to study the levels of biomass resource existing in the islands Robinson Crusoe and Santa Clara of the Juan Fernandez archipelago, through direct assessment methods; for this purpose, scientific echo sounders, cameras and underwater video stereoscopic cameras are utilized.

Jorge Castillo, Chile entry point of the Humboldt project, said, “the bleak is important for Juan Fernandez Archipelago because it is one of the species used as bait in the lobster fishery which is currently certified. For this reason, it is necessary to know their biomass levels, in order to ensure sustainability of the lobster fishery. This fishery of Juan Fernandez lobster was the first certified by the Marine Stewardship Council (MSC) in Chile, the most prestigious certification company in wild fishery worldwide. Moreover, crustacean’s demersal fisheries – nylon shrimp, yellow shrimp and red shrimp, today are certified”. 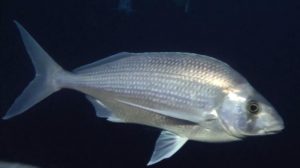 It is an endemic resource of Juan Fernandez archipelago that inhabits rocky coastal areas up to 180 m deep. It would be a partial spawner, with a bounded to fall (peak in April-May) reproductive period. Their food responds to a mainly carnivorous diet with more abundant items such as amphipods gamma rids, decapods crustaceans and small fish.

His capture is mainly done by means of three types of gear, hand line, horizontal and vertical spinel, being the latter the most important (75-95% of catches). Its use is determined by the type of fund and the depth of operation.