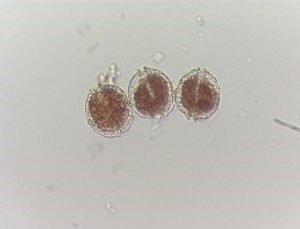 Within the framework of the XLI Congress of Marine Sciences, the researcher Pamela Carbonell from IFOP will be the organizer of the Harmful Algae Blooms Symposium in Chile: 50 years of history, building a path towards ICHA 2025. It will be held on Wednesday, May 25th, between 08:30 a.m. to 11:45 a.m. at Universidad Catolica de la Santísima Concepción (UCSC) headquarters

The symposium objective is to integrate the state of knowledge in our country about HABs, assess the level of understanding processes that trigger or inhibit them, and to identify gaps in knowledge and technologies in order to mitigate or control blooms and their impacts. , account for challenges in terms of governance based on scientific evidence and with community participation

The first record of this microalgae and paralytic shellfish toxin (MPT) was in Magallanes in 1972. An apparent expansion from south to north (55° to 36°S) has since occurred, contradicted by historical and biological data. TPM outbreaks have caused 36 deaths and some 300 poisonings, but since 2000 there have been no fatal cases, until 2022.

(i) interannual variability in A. catenella density and shellfish toxicity are characteristic; (ii) also temporal and spatial differences between macro-regions and within them; (iii) the highest toxicities increase with latitude, but since 2015 this trend has been discontinued; (iv) there are differences, according to latitude, in the periods of increase in the density of A. catenella and outbreaks of TPM occur; (v) during blooms (>300,000 cells L-1) it is numerically dominant, but is usually <1% of the total phytoplankton abundance; (vi) densities in the Pacific are lower than in fjords; (vii) the 2016 bloom in the north of the fjords, expanded towards the Pacific; (viii) that of 2018 showed that the density increases can be explained by passive transport of mobile phase by winds from the S and SE and (ix) the 2022 bloom remained restricted to the southern area of Aysén.

TPM density and concentrations variability are analyzed considering oceanographic and meteorological data from the last 15 years, suggesting that climatic and oceanographic variables may be the main explanatory factors.

Contrasting behavior of the most frequent toxic dinoflagellates in Chilean Patagonia: Alexandrium catenella and Dinophysis acuminata

Alexandrium catenella and Dinophysis acuminata are two toxic thecate dinoflagellates that inhabit contrasting environments in Chile. This work shows formal identification of A. catenella from its northernmost record that occurred on the coast of the Bío-Bío Region. In addition, for the first time he managed to cultivate D. acuminata in Chile, which allowed knowing ecophysiological attributes of growth, toxin production and morphological variation.

Studies based on environmental DNA (eDNA) sequencing have revealed the immense diversity of microorganisms throughout the oceans. In this work, the molecular diversity of phytoplankton communities and their temporal variation in two biogeographical areas with contrasting oceanographic characteristics are described: Fjords/Channels versus the exposed Pacific Ocean.

The resistance cysts of dinoflagellates recorded in sediments obtained in the fjords and channels of Magellan during the CIMAR-25 Fjords and PROFAN oceanographic expeditions carried out in 2019 are studied, and they are related to environmental parameters obtained in said campaigns aimed at interdisciplinary study of Harmful Algal Blooms. (FANs).

The distribution and abundance of resistance cysts of the dinoflagellate species Scrippsiella precaria in sediments of the Biobío region prior to the great flowering of the species that occurred in January 2022 in the Gulf of Arauco is studied. This study is part of the Monitoring of harmful algal blooms and marine toxins carried out by the IFOP in central-southern Chile.

CREAN Roles and projections in FAN research and operational actions

From the CREAN of IFOP, operational and scientific research actions related to HABs and their effects are planned, projected and executed in the oceanic and fjord systems of Chile. This presentation addresses the main results regarding the implementation and use of new techniques for detecting microalgae and biotoxins, based on molecular identification by qPCR and metabarcoding, detection of cytotoxins through cell lines, detection of biotoxins by LC- Mass and LC-FL, ecophysiological rates and use of physical-biological models. In addition, projections and challenges in understanding HAB events in central and southern Chile are discussed.