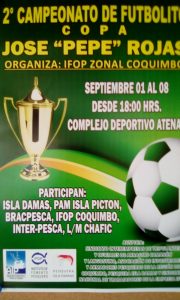 Between the 1st and 8th of September the second version of the football championship will be held, organized by IFOP Coquimbo; This year it is called José Pepe Rojas Cup, in memory of José Rojas Pérez who was in life leader of the Damas Island fleet. The activity will take place from 18:00 hours at the athletic complex Atenas Coquimbo.

This championship was created as a way to promote sport and healthy coexistence among the players in the fishing industry. In 2016, the first championship was held, which brought together IFOP Coquimbo as a sponsor of the activity and in which three local fishing companies which belongs to Crustacean fishery. Due to the great success of last year championship it was decided to make this second version with two new guests of the artisan crustacean and Sernapesca -intertec.

Denis Boré, IFOP Coquimbo chief said: “This championship contributes increasing fellowship relationships among the workers, besides of being a healthy distraction opportunity to have fun and escape from daily routine; Likewise, it favors establishing better relations with the companies with which we work, it should be noted, crew, shipowners and captains. Given the success of last year, two teams were added this year, one representing the artisanal shellfish vessels and the other to SERNAPESCA with Intertek. ”

Juan Tapia, IFOP Scientific Observer and one of the organizers of the event commented “it helps us improve relations with the players of the fishery of crustaceans through sport, taking advantage in September that the fleet of crustaceans stops their work by the effect of the closure of hake, and now adding to the artisan and intertec – sernapesca. We hope it’s a party and a nice moment to share. “