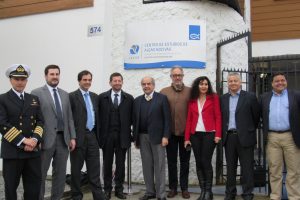 On September 28th, at 5 pm, the Center for the Study of Harmful Algae (CREAN) was inaugurated as part of the Environment Department (DMA) which belongs to IFOP’s Aquaculture Research (DIA), located in Padre Harter 574 Puerto Montt. The activity was attended by regional and national authorities.

Leonardo Nuñez, IFOP Executive Director, explained “CREAN is an operational actions and research unit, with national coverage, equipped with advanced human capital, equipment and infrastructure that is the main knowledge and information source on harmful algal blooms, marine toxins and their effects, and with national and international linkages. From its point of view, it encompasses research and operational actions, and although the unit is located in the city of Puerto Montt in the Los Lagos region, it also has laboratories equipped with advanced human capital, equipment and infrastructure in the regions of Aysén and Magallanes. 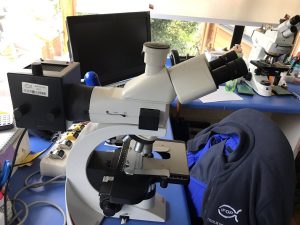 Leonardo Guzman, head of the aquaculture division, added: “The project originates as a result of the support given by CORFO through its Technology Capabilities Management through IFOP Executive Directorate and which allowed funding a proposed idea during 2015 For these purposes, during the last months of 2016 and the first month of this year, an agreement was made to strengthen the management model related to the noxious algal blooms developed by IFOP, through the incorporation of new methodologies and technological capabilities that support the knowledge to deliver early warnings about noxious algae blooms in the macro region of southern fjords and southern channels and incorporates a new management model for algal blooms investigation and monitoring to strengthen diffusion of knowledge and generated information in studies that are currently developing.

The center, although physically located in Puerto Montt, incorporates as part of its property, researchers and available equipment in the regions of Aysen and Magallanes, oriented towards the same purpose, which is “To have a unit to carry out and coordinate scientific and technological research actions, in addition to communication and dissemination actions, in order to spread and disseminate knowledge that allows understanding and minimizing the effects of noxious flowering and aquatic toxins, given its impact on the social and economic environment, and to facilitate decision-making in food safety and productive activities.

All research and operational actions can be addressed in long-term programs, both through research under the direct responsibility of the Center’s own researchers and through collaborative research with working groups of the university system, regional centers and even with the different groups that lead research on these aspects at an international level.

From the geopolitical point of view, the Center can also serve as a means of projecting the country’s scientific and technological capacities and serve as a means to strengthen relations in science and technology field with FANSA countries, without prejudice to collaborative work which may come up with intergovernmental organizations and which have the support of the United Nations (IOC-UNESCO), as well as institutions, centers or groups of recognized international prestige. ”

What’s New in Technology and Equipments 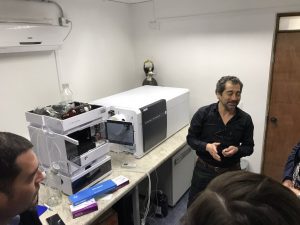 Newly acquired equipment includes an HPLC coupled to a mass spectrometer oriented to the study of marine toxins, in different matrixs, shellfish, water or in the microalgae itself that will be exclusively oriented to marine toxin research; a nutrient auto-analyzer, to evaluate nitrites, nitrates, silicates and phosphates presence; a spectrum-fluorometer, for the study of pigments, which is complemented with the old HPLC that will also be oriented to these effects; two meteorological stations to provide information needed for modeling, two electronic profilers for recording temperature, conductivity, pressure, oxygen, among others, in the water column; 3 chambers of culture with system of regulation of temperature and light for the culture of microalga, to complement the available capacities for these effects; as well as freezers and cooling systems needed for planned and developing work.

In addition, training will be given to all the work team, in their respective specialties, covering aspects related to the use of molecular biology for the identification of microalgae; progress and current status of the taxonomy of harmful microalgae of relevance for the Chilean seas and the biology and ecology of certain microalgae linked to lipophilic toxins, including the development of skills for their cultivation. All these aspects will be addressed in Punta Arenas with the support of international experts.

Leonardo Guzman added that “at the moment it is inaugurated, CREAN already has awarded and developing studies.” These are: Management and monitoring of the red tides in Los Lagos, Aysén and Magallanes regions , stage XI, 2017-18; Monitoring of harmful species and marine toxins in selected bays of the Biobio I region Stage 2017-18; Natural detoxification of bivalves affected by FANs; Transfer improvement of the monitoring of the FANs region of Aysen.

Although there is another study linked to a harmful microalgae that is developed in the DIA, this is not addressed through CREAN, but reflects the institutional capacities to deal with issues related to harmful algae: Monitoring of the pest species Didymosphenia geminata in bodies of water of the south-central south zone.

There are other studies that will be soon initiated, they had been recently approved: Program for Management and monitoring of harmful algal blooms and marine toxins in the Pacific Ocean from La Araucania to Aysen (I stage) 2017-18; (Kyoto University, National Research Institute of Fisheries Science, Okayama University, University of the Border (UFRO), Universidad de Antofagasta (UA), Universidad de los Lagos (ULagos) and Instituto de Fomento Pesquero (IFOP) (to be started in April 2018).

And others that are under evaluation: Coupling of cytotoxicological methods and physical-biological models for the detection and prognosis of harmful algal blooms (University of Tasmania, Universidad de Conception and Institute of Fisheries Promotion); Hyper-spectral fingerprint of red tide species through the coupling of remote and in situ bio-optic signals in Southern Chile (CSIRO, Australia and IFOP). “