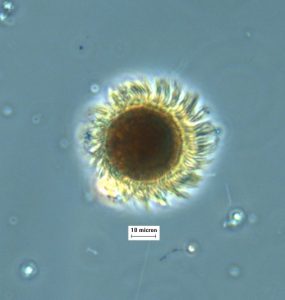 This is the ciliate microalgae Myrionecta rubra

On February 8, Francisco Calderón de Sernapesca, took a water sample at the surrounding area of Isla Capitán Aracena, Estrecho Magallanes to be analyzed by the professionals of the Instituto de Fomento Pesquero in order to identify any harmful microalgae present in it, since the sea in that area presented a reddish blood color that caught the attention of the Sernapesca professional.

César Alarcón, an IFOP researcher, explained about the sample. “at the beginning of the observation, a microorganism was identified, a ciliated protozoon whose scientific name is Myrionecta rubra. This ciliate was the dominant specie in the sample, which is seen as a circular reddish brown body, surrounded by spiral cilia. It is characterized by its wide and fast mobility.

The blooms of the ciliate Myrionecta rubra are frequently observed on the coast of Chile and have also been observed previously in the region of Magallanes, since the decade of the seventies on. Only as an anecdotal way, can it be pointed out that Charles Darwin, who was in Chile during his famous voyage around Earth, at Concepcion height, observed a sample that presented great concentrations of this ciliate protozoon.

In general it is a specie that is not associated with the production of toxins and therefore does not affect human health, nor has been associated with negative effects on other organisms such as fish in our country. Characteristic of its blooms is that it produces an intense red or red discoloration of the waters.”