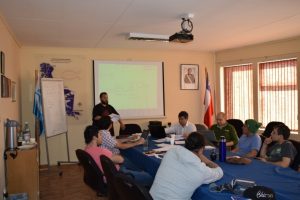 In Punta Arenas, between December 18 and 22, the Discard project developed a standardization workshop for data collection carried out on board the trawler and longliner vessels. Thirteen scientific observers participated, the field coordinator and researcher Mr. Cristian Vargas and the personnel of the discard project.

Claudio Bernal, head of the discard project explained “a ship factory, is one which can process the fish on board. They are great size (more than 70 mt ength) and by Law, they can only operate to the south of latitude 47° S (approximately from Region XII). These ships make trips that last from 40 to 60 days. The target species of the trawler factory vessels are mainly: Southern hake, hoki, Southern blue whitting, Golden kingklip. On the other side, factory longliners vessels target are Southern hake, hoki and Chilean seabass.

Due to the long time on board and the important differences between the vessels, a standardization process of the way in which the data is collected was necessary. This makes them comparable. ”

“The work was done based on workshops, being the observers the protagonists, describing the methods utilized in each one of the ships they embark. The workshop allowed to know in detail the differences of operation between the vessels, in order to find ways of adapting the collection procedures to their reality. It also provided a space for communication that allowed sharing much information that is not in the forms and is part of the experiences of this valuable group of people,” concluded Bernal.