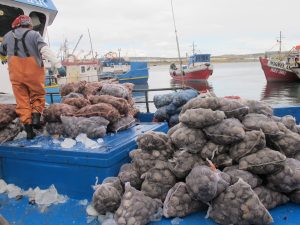 Dr. Carlos Montenegro head of the project explained “Magallanes and Chilean Antarctic Region has experienced an artisanal fishing activity sustained increase in the last 10 years, an increase that has been associated with fishermen immigration process, mainly from Los Lagos, Aysén and Biobío regions also to fishing companies establishment that commercialize fresh refrigerated resource in European, American and Asian markets. This has translated into a greater fishing effort, but it has also meant a greater job offer, which has transformed fishery benthic resource into one of the region’s main economic axes.

A special case is southern oyster extraction, a Patagonian channels endemic species associated with fjords and channels in the Magallanes region in southern Chile, which, from 1990s, generated an important fishery. reaching a historical maximum of 3,670 tons landed in 1998, dropping dramatically to 209 tons in 1999. Starting in 2001 and given the condition of over-exploitation that this resource presented, the authority had an extraction ban for the entire Region for a 3 years period, which was extended until 2005 ”.

The project will last 21 months.