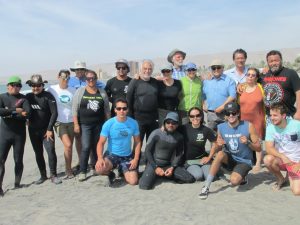 They met to support the proposal of the marine reserve of green turtles in the sector of Puntilla of Chinchorro beach.

The professionals held working sessions to discuss important issues regarding marine turtles in our country, among them; we must highlight the development of the National Action Plan for sea turtles and the marine reserve at Chinchorro beach, where there are important aggregations of turtles which must be protected.

The Intendant, Gladys Acuña, met with the professionals and appreciated the presence of the group of experts and the work developed by the Universidad Arturo Prat and different services and NGOs through projects of Fondo de Innovación para la Competitividad (Innovation Fund for Competitiveness).

The Intendant added that “the fact that this meeting which brings together scientists, NGOs and specialists is held here in the Region of Arica and Parinacota is not random, it is done here precisely because in this sector there is a habitat of turtles of great importance and, of course, there is also the great work done by Arturo Prat University through research projects supported by the Regional Government, which has allowed us to have certain certainties regarding what it means this habitat for marine turtles.”

Marco Soto, Fishing Zonal Director explained “the meeting was held in Arica as a way to support the suggestion of the marine turtle reserve here in the area. This protection area is located in La Puntilla area of Chinchorro beach. There are about 56 hectares where the turtles live and feed, would be the first marine reserve of this nature in Chile. Our work as Subpesca has to do with the conservation of marine resources.

Fishing Zonal Director, when evaluating the activity carried out in situ, thanked the presence of the National Group for its scientific support and the Intendant Gladys Acuña.

The president of the group, Dr. Patricia Zárate, explained that the meeting is being held in Arica as a way to support the proposal of marine reserve and granting collaboration to the Arturo Prat University that is working on this matter, in addition to the elaboration of the Action Plan, which is being carried out for the first time in Chile. We are evaluating the threats that affect sea turtles, what actions should be taken to avoid these threats, we recognize the turtles in various parts of the country that come to feed to Chile, turtles are endangered animals in all parts of the world ”

Antonio Palma, of Servicio Nacional de Pesca, said “we have the fundamental mission of enforcing the fishing regulations in the country on protected species, among which are marine turtles, these species are incorporated in a regulation that establishes them as species protected, is the decree 225 of 1995. They, like other species, are subject to an indefinite closure that should be renewed in 2025, Sernapesca is also working on rescue issues and rehabilitation of these species and, on the other hand, we also have the CITES International regulation (Convention on International Trade of Endangered Species of Wild Fauna and Flora, which considers them in Appendix I as endangered species, therefore these meetings of the National Group are very important ”

Paula Salinas, from Universidad Arturo Prat and the Pacific Laúd NGO, concluded: “We are very pleased that the meeting is held in Arica, thanks to the Regional Government and its projects, they have been able to finance the program of conservation of sea turtles in a first and second stage, this program is run by Arturo Prat University and has generated an important database for marine turtles, the fact that all the scientists of the national group are here in Arica make us feel full of pride as they can see in situ what is being done by the turtles.”