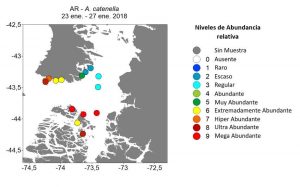 Map of distribution and relative abundance of Alexandrium catenella in Melinka, Corcovado Gulf and southeast of Chiloé Island areas.

The last samples taken in Melinka, Corcovado Gulf and the southeast of the island of Chiloé areas, by (CREAN) Harmful Algal Studies Center wich belongs to(IFOP), Fisheries Development Institute show a worrying increase in abundance of Alexandrium catenella This sudden increase occurred in a period of 5-7 days, suggesting that the noxious microalgae has been transported from the Aysén region (Chonos and Guaitecas), where an intense and extensive flowering of this microalga is occurring, excluding the Pitipalena estuary and the Tortel sector.

As a consequence of these signals, CREAN has work scheduled for Los Lagos region Pacific coast which begins in the coming days and will extend from the southern tip of Chiloé island (Caleta Zorra) to Mansa bay in the north region. In each of the sectors, work will be held up to 10 miles off coast, taking water samples for phytoplankton and nutrients analysis and oceanographic and meteorological parameters recording, as well as seafood collecting on the coast for toxins analysis.

Also, an extensive campaign beginning on Thursday will cover different sectors of Aysén region, including Yacaf and Puyuhuapi channels, to obtain new information that allows to appreciate flowering status that currently affects that region. The background information collected will not only allow us to appreciate if the event is in decline, but also will make it possible to collect important information and live samples from the microalga, both for laboratory experiments, as well as to improve the quality of the physical-biological model that is is developing to understand and have a better early warning linked to these events.

The CREAN is an IFOP recently inaugurated unit whose main purpose is to systematize, encourage and develop studies of harmful algal blooms in Chile.