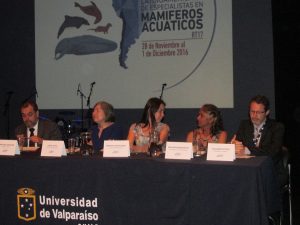 Between November 28 to December 1st, SOLAMAC 2016 was held in the Cultural Park of Valparaíso, where the Latin American Society of Aquatic Mammal Specialists (SOLAMAC) brings together academics, researchers and students from Latin America every two years, to discuss aspects related to the study of aquatic mammals in our countries. These scientific meetings have become an event of great importance for our society, since they allow to increase the development of scientific knowledge, to train new researchers and to be a platform that contributes to the creation and consolidation of ties between the researchers. Its motto is “Current and Future Threats for the Conservation of Aquatic Mammals in Latin America”

Doris Oliva, academic at the University of Valparaiso, referred to the inauguration “today we are at the opening of SOLAMAC. We have 300 participants enrolled, many students from all over Latin America and also researchers, we have various scientific activities and round tables, which will be very relevant. One of them is related to how the scientists transmit our research results to the social media, the other table is of wide trajectory researchers that will transmit to the new generations how to do science in Latin America, what are the associated challenges and, finally, we will have a table that has a more international orientation, we will analyze the subject of bycath in the fisheries on the marine mammals and which are the legislations that will come at global level.”

Eduardo Secchi, President of the society, explained “the meeting is held every two years, Chile is one of the most active countries in the conservation and research of aquatic mammals in Latin America. Always in these meetings many students participate, so we hope as a society that presentations and discussions among colleagues inspire young students in the conservation of aquatic mammals, since they represent the top of the marine and freshwater aquatic ecosystems and therefore their conservation also allows to conserve the ecosystems and this is important for the well being of the whole society. ”

Round table “press and science”

It was inaugurated with a team made up of prominent journalists from the area who work on fishing and aquaculture issues and the academics of the University of Playa Ancha (UPLA); María de los Angeles Miranda and Danilo Ahumada Flores, who is also the president of the journalists’ school, Natacha Valenzuela López, journalist from the Subsecretaría de Pesca and Aquaculture and from the magazine Nuestro Mar de El Mercurio, Atilio Macchiavello Cárdenas, Director of EOTV and Gabriela Gutiérrez Vivar, journalist of Instituto de Fomento Pesquero.

The team of communications professionals talked to the scientists about the right way to make a news story, and the importance of having social media dissemination, they taught and updated the use of social networks, as a way to deliver scientific information to the community and some issues related to the Press Law and exercise of the profession of journalists were reinforced.