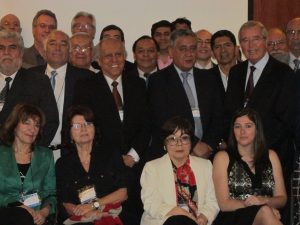 The project aimed to “Move towards ecosystem-based management for the Large Marine Ecosystem of the Humboldt Current (GEMCH) through a coordinated framework that strengthens governance and sustainable use of marine living resources and ecosystem services.”

Jorge Castillo, focal point of the GEF in Chile explained “this seminar presents the results obtained in the Chile-Peru Binational Project “Towards a Management with an Ecosystem Approach of the Great Marine Ecosystem of the Humboldt Current,” which was developed between 2011 and 2016 and funded by GEF (Global Environment Facility), considering the experiences of development and implementation of initiatives or similar projects around the world.”

A GESCH Transregional Diagnostic Analysis was carried out, the causes and root of the environmental problems detected in the ecosystem were determined and a Strategic Action Plan was projected to be implemented in the two countries in the next 4 years.

A comprehensive capacity-strengthening plan was developed at institutional level (fisheries and environmental), including users and the community in general for the implementation of the ecosystem approach and implementation of the PAE, through more than 17 courses, 33 workshops, including the participation of international experts and internships in 17 international events. There were also 19 consultancies that allowed improving the knowledge of the ecosystem. In the framework of this project, the first approach to the economic valuation of the Humboldt ecosystem was carried out, which considered all the goods and services delivered by the ecosystem, with an estimate of the annual value of the flow of ecosystem goods and services provided by GEMCH of US $ 19,459 billion.

Patricio Barría, researcher of IFOP, referred to his presentation at the workshop “people will be informed on the realization of three binational workshops on methodological advances in trophic web of top predators; in which the advances made on feeding, consumption and trophic interactions of the top predators in the South Eastern Pacific Ocean were exposed. That is to say, it was possible to know the investigations carried out by Chileans and Peruvians who work in diverse taxonomic groups, such as: seabirds, fish, reptiles and mammals and cephalopods and, secondly, it was possible to know the scientific level of both countries and the international development to determine knowledge gaps.

The results have been important, first, a collaborative network of Chilean and Peruvian researchers was established, and knowledge gaps were determined. In addition, research centers with the latest technology were identified (stable isotopes, fatty acid identification, genetics (mitochondrial and nuclear DNA exams) for identification of marine species and products, etc.). Finally, initiatives were initiated in both countries for national plans to strengthen research in trophic webs that are of great relevance in understanding the structure and functioning of the large Humboldt marine ecosystem. We are aware that we are just beginning these lines of basic research and we still need to reach a higher level of scientific development to incorporate these advances in tools for ecosystem management, as the models of various levels of integration and complexity. “