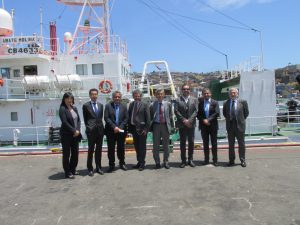 Undersecretary of Fisheries and Aquaculture, Raúl Súnico, together with Director of IFOP, Leonardo Núñez, led the activity in the framework of the 25th anniversary of the Chilean scientific ship.

The First Secretary of the Department of Economy of the Japanese Embassy in Chile, Susumo Kurata and the resident representative of JICA in Chile, Hidemitsu Sakurai, visited the scientific ship Abate Molina this morning. The activity was led by Undersecretary of Fisheries and Aquaculture, Raúl Súnico, and the Executive Director of the Instituto de Fomento Pesquero (IFOP) Leonardo Núñez, who made public the works and advances in research topics led by the scientific ship.

The visit is part of the 25th anniversary of Abate Molina. Scientific ship donated by the Government of Japan to the Government of Chile that was designed jointly by experienced Japanese and Chilean technicians, and built in the legendary MIHO shipyards of Japan. On 03 March 1991, she arrived to the country, being received in Valparaiso by the President Patricio Aylwin Azócar, and since then, has been administered and operated by Instituto de Fomento Pesquero.

Leonardo Núñez, Executive Director of Instituto de Fomento Pesquero referred to the activity “for us is important this visit of the delegation of the Japanese embassy, as the ship is a donation from Japan and this year turned 25 years of uninterrupted operation . The Abate is a strategic research platform for our country, in which the oceanographic and fishing research is developed to generate the reports of the state of the resources to the Subsecretaría de Pesca and, based on these studies, the authority makes the decisions on management.” 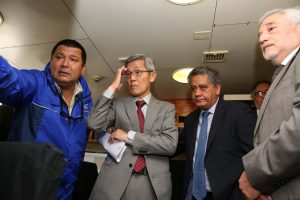 The visit also coincides with the next cruise “Hydroacoustic survey of anchovy recruitment at the XV, I and II Regions, year 2016”. The study area is between Arica (18° 22’S) and Punta Buitre (24° 40’S) with a total period of 28 days.

The overall objective of the cruise is to evaluate the juvenile stock of the anchovy resource, through the hydroacoustic method, existing in the area between the XV and II Regions, and characterize the recruitment process of the species in the study area. All this for estimating the abundance (in number) and biomass (by weight) of the juvenile fraction of anchovy that are incorporated in the period of maximum recruitment to the fishery, in addition to the composition of size, weight, age and sexual proportion of the anchovy stock in the study area and elaborate the respective size – age keys.