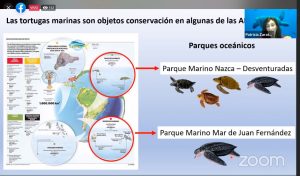 Dr. Zárate’s presentation focused on the leatherback turtle, a highly migratory species in decline in the Pacific Ocean, currently considered under “Critically Endangered” category by the Nature Conservation International Union ( IUCN) and for which important efforts have been made for its populations recovery and protection, some of which have been related to marine protected areas establishment. Dr. Zárate focused on marine areas created by US National Fisheries Service on the United States west coast, such as the approximately 552,000 km2 California-Oregon Conservation Area, which is closed to fishing every year. for a 6 months period due to the leatherback turtle presence .

Subsequently, she reported on IFOP investigations that she has been carrying out for several years with respect of sea turtles connectivity present in exclusive economic waters zone, particularly, nesting beaches identification from which these species come. She indicated “sea turtles migrate from these areas and travel thousands of kilometers to reach Chile where they feed and develop until they reach adultness.”

Dr. Zárate also referred to how Nazca-Desventuradas and Mar de Juan Fernández Marine Parks creation have benefited sea turtles, providing approximately 500,000 m2 of free fishing area that protects the oceanic feeding area and part of the migratory route of turtles that reach Chile. She also spoke about a critical habitat for green turtle, located in the north of Chile, off Arica, which has already been requested for the creation of a Marine Protected Area. This area would protect not only the green turtle, but also the other species of turtles present in the area and other migratory species such as birds, marine mammals and sharks.

Finally, Dr. Zárate indicated that, “given the migratory nature of sea turtles, international collaboration is essential, the turtles do not recognize the borders of the countries and in their migration they pass through different exclusive economic zones. The creation of marine protected areas will ensure the protection of critical habitats and the most vulnerable stages of development of these and other species threatened with extinction ”.