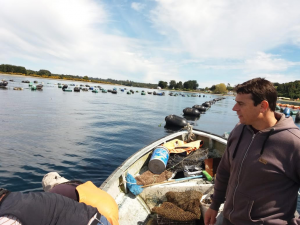 Matías Schwartz, is National Fisheries and Development Research Institute, in Argentina, (INIDEP) researcher. As a professional he carried out an internship, which considered one week in October, working together with IFOP researchers.

Francisco Cárcamo, Repopulation and Culture Department head indicated “within the framework of the collaboration agreement that IFOP maintains with INIDEP, Matías contacted us so that we could train him in management techniques and laboratory bivalves larval development .

Matías Schwartz, works in the Patagonian scallop fishery (Zygochlamys patagonica) and has been experimenting with this species for a couple of years under controlled laboratory conditions to develop the complete biological cycle, which is still unknown for this species. In Argentina, Patagonian scallop banks are found at depths ranging between 80 and 100 meters, on the edge of the continental shelf, in the Malvinas Current waters with temperatures close to 7.5 ºC. This species is also of commercial fishing importance in Chile’s southern zone and is known as Patagonian oyster.

The training work was mainly concentrated in IFOP’s Hueihue Experimental Center, located on Chiloé Island, and was at Carlos Muñoz Center’s head charge, who has extensive experience in invertebrate cultures in hatchery. Muñoz explained that “we worked with two species of scallops, northern oyster (Argopecten purpuratus) and another species that locally name it as a Chilote oyster, but that could be a Patagonian oyster according to the latest taxonomic revisions. For both species and based on the technique of seed production of the northern oyster A. purpuratus, breeding methodologies, induction of spawning, fertilization, selection and maintenance of first larval stages were applied. The short but successful period of practical training was complemented with talks in which an attempt was made to transfer much of the accumulated experience in obtaining seed of this pectinid and other resources with which it has worked in the Hueihue Experimental Center.

Additionally, Schwartz learned about the work carried out by other groups of professionals within IFOP Aquaculture Research Division.