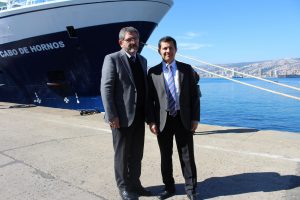 Armada supported scientists at the Institute for Fisheries Development for 20 days in a research cruise.

Valparaíso. A team of professionals from the Institute for Fisheries Development (IFOP) embarked on the scientific ship AGS-61 “Cabo de Hornos” to evaluate the spawning stock of “southern hake”, tail and three fins in the outer waters between the X and XII regions, during 20 days, period where the companion fauna of the hake and its food composition were also analyzed.

The research site covered the outer sea area between Guafo Island and the Taitao peninsula, which corresponds to an area between 400 km and a width of 20 km.

Commander of the AGS-61 “Cabo de Hornos”, Captain César Miranda, detailed the support given to scientists, “in particular this year is the third cruise we developed and naturally presented special characteristics for the challenge of To materialize all the tasks that were foreseen, we had a rather hostile meteorological condition, particularly due to the southern conditions of our country and the bad weather fronts, however, the platform as a ship, the crew and all the scientific IFOP personnel boarded, They were able to give their best in order to fulfill all the work we had planned ”

René Vargas, researcher at the Institute of Fisheries Development (IFOP) and head of the project, commented that “this cruise of the ecosystemic type, considered taking different types of data such as: acoustic, through the use of ultrasonic sensors to estimate abundance and distribution Spatial distribution of the resources, fishing sets with nets to obtain biological samples that allow to characterize the demographic structure, food relations and reproductive condition of the southern hake and cola hake. In addition, the collection of oceanographic and meteorological data, which are oriented to know the habitat in which these resources are distributed.
While the Director of the Fisheries Development Institute, Leonardo Núñez, explained that, “from 2002 to 2016 IFOP has developed a series of research projects aimed at estimating the southern hake and tail hake stocks, which have also allowed biological knowledge of the species, to obtain a historical series of the size of the stocks, information that, being available in an updated way, is an important antecedent to support the decision making of fisheries administration.

Luis Carroza, Executive Director of the Fund for Fisheries and Aquaculture Research (FIPA) of Subpesca, explained that, “this study is part of the strategic research program implemented by IFOP and financed by sectoral public funds, which as a whole involve an important annual investment that is oriented to the realization of the different studies that permanently monitor the main fisheries of the country and are necessary for fishery administration and aquaculture decision making processes.

It should be noted that Chilean Navy´s “Cabo de Hornos” ship is one of the 5 most modern in the world to carry out scientific research, so it is of great importance to count on it to support this type of studies of relevance to Decision-making in the area of artisanal and industrial fishing in our country.