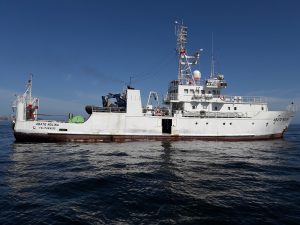 In order to materialize this initiative, Maritime Government of Valparaíso ,Meteorological Center personnel held meetings with Abate Molina’s Captain and deck officers during which, together with publicizing VOS scope program and promoting the use of forecasts and graphic material prepared by Navy Meteorological Service, a review and calibration of the ship’s meteorological instruments was carried out. During these meetings, parties were also able to share and exchange experiences, establishing contact and cooperation ties.

In 1991 the ship was donated by the Japanese Government to Chile and since then it has provided services to the IFOP. It is named after Jesuit Juan Ignacio Molina y González, considered the first Chilean Scientist. This ship carries out, annually, investigation commissions in national waters and its base of operation is Valparaíso’s port. The meteorological observations data reported from this ship will be very useful for forecasts preparation, and to have Valparaíso’s bay shipping routes weather conditions more detailed knowledge , which will benefit all users. maritime that ply national waters.